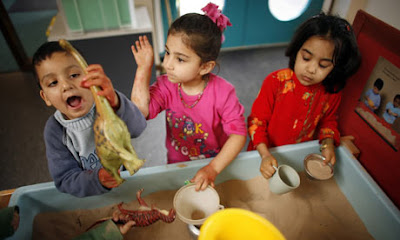 A newly released survey of early years and primary professionals, released at the launch summit of the Save Childhood Movement on the 27th and 28th of April and prepared in partnership with the Barrett Values Centre, has revealed an enormous disparity between the values that teachers feel are important for the education system and what is actually going on.

- While 67% of those surveyed thought that education should be child-centred as a matter of priority, only 2% thought the current system fulfilled that.

- While 60% of respondents thought creativity should be prioritised, less than 2% thought the current system supported it.

- And while 50% believed that early education should emphasise the importance of play, only 2% thought the current system did that.

- Only 2% of respondents thought that the current system cultivated a passion for learning, and 0% believed that it fostered empowerment.

When asked which words best described the current state of British education as they experienced it, the most common words were:

In contrast, when asked which words they believed should characterise education the words most commonly chosen were:

child-centred, creativity, importance of play, passion for learning and empowerment.

The gap between the values held by the practitioners themselves and those of the education system as a whole revealed a level of 'Cultural Entropy' (meaning the degree of dysfunctional or fear-driven behaviour) that the Barrett Values Centre terms "a critical situation requiring leadership changes to avoid organisational
failure'.

The survey examined the values of 177 early years professionals including childminders, nursery and primary school teachers and headteachers, school governors, lecturers and academics and was conducted between the 10th and the 17 of April, 2013.

Wendy Ellyatt, Founding Director and CEO of the movement, shared her own deep concern about the current situation -

" It is simply unacceptable that there should be such a disparity between the values that teachers themselves hold and the systems that we are then asking them to work within. How we can expect them to be the creative, spontaneous, passionate and empowered adults that we really need around children when they are empowerment, constantly ground down by the demands of the system? We need something better and the movement is determined to help fight for this."

The movement hopes to soon extend this survey to include a much more significant percentage of the teaching profession.