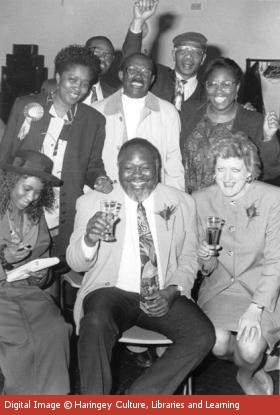 Apart from the death of Margaret Thatcher, today also marks the 13th anniversary of the death of Bernie Grant one of her greatest enemies. In this guest blog first published on The Voice website, potential Labour candidate for Brent Central, Patrick Vernon, asks what would Bernie make of the current political climate:

TODAY IS the 13th anniversary of the death of the late Bernie Grant, MP for Tottenham between 1987 to 2000 and former leader of Haringey Council.


In the 1980s and 1990s Bernie often spoke the truth, real feelings and passions on behalf of every one which meant he became a thorn in the side of Thatcherism and New Labour.


However, he was still respected and revered as the elder statesman and father of the house for black parliamentary representation.


People today still talk about Bernie’s life, achievements and legacy at times in a present tense which reflects his impact but also the gap in current black leadership and the question of more elected representatives.
Just imagine if Bernie were still alive today. What would he have made of this period of austerity and the coalition government with increasing inequality facing BME communities; the introduction of bedroom tax; welfare reform, immigration policy, and massive cuts to public services?


How would Bernie make the case today for all black Parliamentary short list, social justice and reparations?


I believe that Bernie would be turning in his grave to see how the coalition government has no or very little regard to race equality policy and legislation which he and many others made this a life and at times a death struggle over the last 50 years.


The issue of black representation and self-organising groups like the development of Black Sections in the Labour Party (now BAME Labour) and black workers groups in trade union movement was one of his strategies for empowerment and developing a black-led perspective on Democratic Socialism.


One way of taking forward the legacy of Bernie Grant is developing a political education programme around his vision and principles to attract and identity the next generation of potential councillors, MPs, MEPs and community activists.


That is why he is still popular and an iconic figure which was reflected in Bernie being in the top ten of 100 Great Black Britons back in 2002.


So let us use this opportunity to reflect on his legacy in politics, the trade union movement and grass roots activism.


I know many of us are trying to do capture and follow his vision today. That is why his political legacy, The Bernie Grant Arts Centre, The Bernie Grant Trust and his archives at the Bishopsgate Institute are essential resources for political education, learning for young people, aspiring, seasoned politicians and campaigners.


‘The Importance of the Black Vote’ will be held at Dalston CLR James Library, Dalston Square, Hackney, London, E8 3BQ on Friday April 12th 2013 at 18:30- 21:00. Speakers include Simon Woolley of OBV, MP Diane Abbott, Jules Pipe Mayor of Hackney, Ngoma Bishop of BEMA and Pauline Pearce from the Hackney Liberal Democrats. The event will be chaired by Andrea Enisuoh of BEMA & Hackney Unites.