Brent's message to Birbalsingh: 'You are not wanted here' 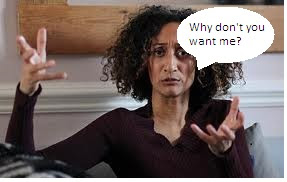 Having attracted only six (almost all critical) people at its first consultation, Michaela Secondary Free School hit rock bottom at its second, evening, consultation last week. As far as I can ascertain two people went along and they were both opposed to Katharine Birbalsingh's 'traditional' and 'disciplined' secondary school where she has appointed herself headteacher.. One was a union representative who wanted to put her reservations on record.

The small room at Chalkhill Community Centre looked crowded, but it turned out to be full of Michaela staff and governors.

It will be interesting to see whether the DfE nonetheless goes ahead and gives Birbalsingh a stash of taxpayers' money to refurbish Arena House and pay herself and her staff salaries when Brent schools could do with the money.
Posted by Martin Francis at 08:34:00

And next week her school opens. Almost full I gather. The parents have won. Great news.