A wet Monday morning is not the most auspicious time for a demonstration but this morning's at Brent Civic Centre was lively enough. Human rights activists were protesting at Barry Gardiner's invitation to Narendra Modi to speak in the House of Commons on 'The Future of Modern India'.

Modi (see previous posting LINK) is charged by activists with not intervening in, or even supporting, the 2002 massacre of more than 2,000 Gujerat Muslims. His Hindu nationalist party, the BJP, is denounced by many as fascist.

Barry Gardiner is Chair of the Labour Friends of India and issued the invitation in that capacity, However his critics suggest that the invite was aimed at securing the substantial Hindu vote in his Brent North constituency and to be based on enhancing business opportunities rather than human rights principles.

Gardiner came outside to meet the demonstrators and to distribute a statement. He was surrounded by angry activists who tried to talk to him to the background noise of chants of, 'Barry Gardiner, Shame, Shame/Inviting Modi, Not in Our Name; Barry, Barry, Don't Lie/Modi Guilty of Genocide.'

It does seem that Barry Gardiner has introduced a potentially explosive and divisive element into UK politics with his invitation and an issue that could impact on local community relations. 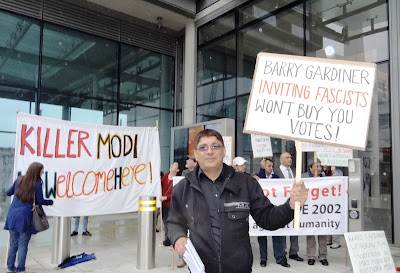 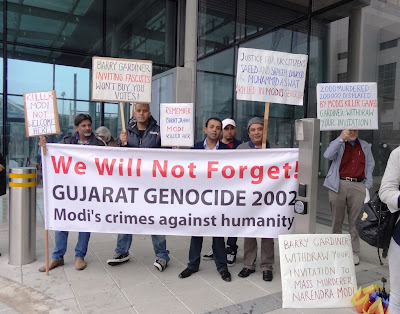 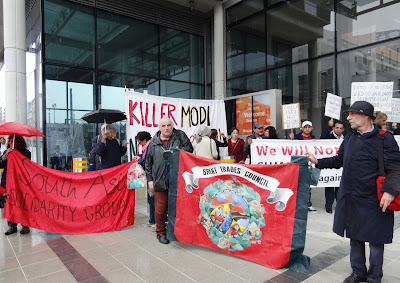 10-15 people with banners holds no credence to fact that modi has no litigation against him. If ever he visits UK as PM of India, thousands of people will cheer him. His support among Indian origin ppl is unprecedented.

Nonsense. There were around 100 people there representing a wide range of organisations, trade unions, human rights organisations and Hindu, Muslim and Sikh groups. Modi has minimal support amongst Indians hence his desperate desire to court international politicians.

If Modi does dare to come here he can rest assured that he will not have a moment's peace. That's if he has the courage - last time he was due to visit the UK in 2005 he cancelled at the last minute as there was an arrest warrant issued for the murder of the the 3 British citizens killed in the Gujarat riots.

The Supreme Court has not cleared Modi of his crimes despite what Barry Gardiner claims and the case is being investigated further.http://www.kractivist.org/press-release-supreme-court-clean-chit-to-narendra-modi/