Blood on the carpet at Brent Civic Centre as senior management jobs slashed-but what about the new jobs created? 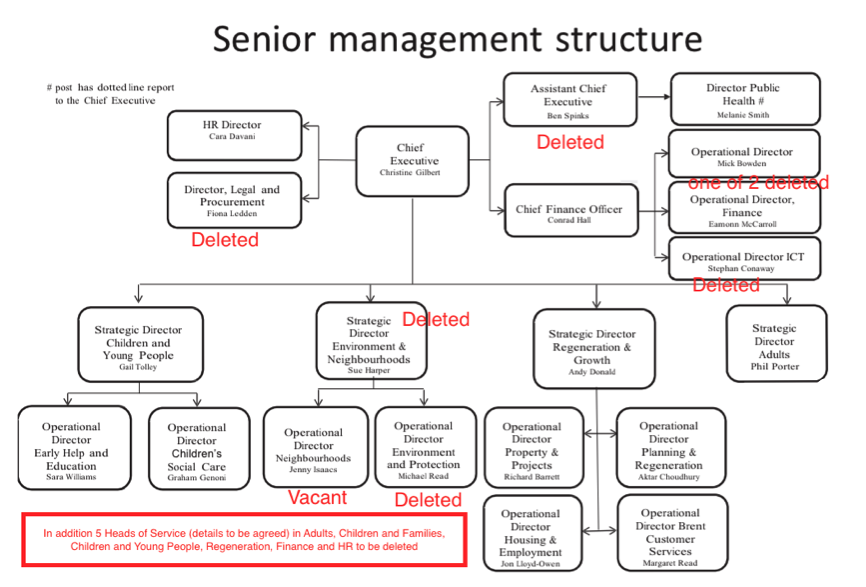 I am now able to publish the details of the senior management restructuring that Brent Council are about to consult on. The proposals are aimed at cutting £1.4m from the Council's budget.

In addition to to the posts in red, above the Head of Sports and Parks, Libraries and Heritage and Partnership and Engagement are proposed to be deleted along with the Head of Business Intelligence.

Unusually there are no authors cited on the report (which is available below) but the process will be managed by Interim Chief Executive Christina Gilbert and Human Resources Director Cara Davani.

One high profile casualty could be Fiona Ledden, Director of Legal and Procurement. Ben Spinks, Assistant Chief Executive, has only been in post a short time - since the last restructuring...

As well as the deletion of posts, new posts are to be created. Sharp-eyed insiders have pointed out that a new post of Chief Legal Officer has been ring-fenced to three Hay graded lawyers, which includes Cara Davani's partner, Andy Potts.

None of the other new posts have been ring-fenced. The two Operational Directors in Finance will have to compete for the remaining post.

The abolition of the Environment Department follows the privatisation of most of its service through the controversial  Veolia Public Realm contract.

Insiders suggest that a new job, Chief Operating Officer, at Hay 2 (the lower the number the higher the salary)will be extremely sought after - perhaps by Cara Davani herself.

As readers will know one of the regular allegations made by Brent Council workers in comments on this blog  is that people are being eased out of their jobs by a variety of methods, often accompanied by gagging clauses, in order to make way for people who formerly worked at Ofsted and Tower Hamlets Council.

Some are asking if this is the most audacious move yet in that strategy.

I don't know about audacious, it looks more like 'shit or bust' to me. Nemesis looms so let's grab all the power and money while it lasts.
Why no education/children/families job for Sally Morgan though? Her Ofsted time is up and she already works for Ark Academies, owners of various local schools. The ultimate Ofsted/Tower Hamlets takeover strategy could then be to bring in Lutfur Rahman as Operational Director (Grants and Elections) to ensure that Cllr Butt would never have to bother 'looking over his shoulder' ever again.

I can only imagine that dreaming up this shameless bunch of chancers' schemes is the job of the Head of Digital Services; giving the finger to standards of honesty and legitimacy in public life.

'Giving the finger to standards of honesty and legitimacy in public life'.
What a great new mission statement for Brent Council ! I can see it on posters on the back of buses now. With an appropriately related logo.

Could a creative person write a play or Xmas pantomine about this?

It could be mixture of Hamlet and Macbeth. It could be a play within a play where the play acts out the reality the ..murder of Hamlet's father??

Council Leader/? Lord Chancellor could agree to all the actions of the evil Godmother getting rid of people one by one well you know the story...with the leader of the council/Lord Chancellor watching on agreeing to moves. In the play for the future... she wipes him out and all the councillors and they have consolidated all the paid jobs..down to 2..plus bought out all the companies they have procured. Banned all cats and any dog that is not related to her pedigree dogs.

She could be a mixture of Lady Macbeth as well as ?Getrude

Looking at blood spots on her hands..all her victims. Haunted by ghost of Rosemary Clarke and others.

"100% of those affected are White British. This represents a disproportionate effect on this group compared to the percentage council wide but is unsurprising given a larger proportion of senior managers in the council are White."


Statement above taken from report probably says a lot about the Rosemarie Clarke case.

I also noticed that. Hence the comment by one Labour councillor that Brent Council resembles a pint of Guinness.

What concerns me is that the majority of these posts are filled by people living in leafy suburbs in Surrey/Sussex/Kent and do not reflect the make up of the Borough they serve. The post created will be guaranteed to be filled by the same, no doubt.
Given it may not be possible to give preference to the people living in the Borough for filling posts it should be a goal of the Council to recruit from inside, wherever possible. But there seems to be the opposite going on currently, getting rid of good staff who are probably local and applying cronyism instead.
A lot of the problems highlighted on this blog are caused by this issue, by people who are just ruthless individuals caring only about their own salaries, and careers, and nothing about the area itself and would not tolerate the same issues in the areas they live.

As the saying goes cats don't shit in their own gardens.

I didn't really understand that comment when I read it. Is it supposed to be an acknowledgement that it's somehow unfair on the white staff but only to be expected given that they're all white anyway?
It seems a bit like saying that 100% of the people affected by a mansion tax would be owners of very expensive houses. Or that a clear out of the cronies running Brent Council would have a disproportionate effect on the Cara Davani/Christine Gilbert community.
Mike Hine

I've heard a rumour that Christine Gilbert has recommended that the permanent role of Chief Exec be filled by an ex-colleague of hers when she finally departs - Mr Richard Head.

This just gets worse, and every time the organisation is changed the target savings figure gets higher and higher. Five years ago, there was a structured plan under Gareth Daniel and Cllr Ann John that was credible, achievable, and compassionate towards the inevitable casualties. What on earth happened? The Corporate Management Team became a mess and totally lacked leadership.

OUT went Daniel, Cheeseman, Saunders, McLeod, and Osborne and IN came a bunch of non-entities who were unfit to lace their predecessor's boots, whilst the likes of the Policy & Regeneration Unit under Phyllis Newby fiddled whilst Brent burned.

Edited comment: The rot set in when Cllr Ann John was deposed in a coup by Butt, who then despatched Gareth Daniel who could be prickly but was fair, efficient and compassionate.

The meddlers behind the scenes then enlisted Ledden and a whole host of consultants(all handpicked and never subject to tendering rules under Standing Orders) to poison the Council's main partner organisations and damage what had been strong external relationships which provided the only real vision and innovation for the Council.

Out of control, out of their depth, and hopefully out of Brent soon, before the whole Council goes under Special Measures.

Martin,
Don't understand why some contributions are 'edited comment'. What does this mean exactly?

What I don't understand is that when people like this appear on The Apprentice (if you can bear to watch them) they are regarded as a joke. When they appear on a Haringey/Tower Hamlets/Brent Council senior management job application form they're immediately offered a six figure salary (paid into a tax fiddle 'company'), given an oyster card or two and allowed to drop in to work when they're not too busy with dog shows, Employment Tribunal commitments or moonlighting jobs in neighbouring boroughs.
Why?

I moderate all comments and publish as many as possible. I do have to be careful of possible legal action as commenters are often anonymous so I as the editor/publisher am responsible. The difficulty occurs when someone makes a comment that has validity but includes a name or accusation without evidence. I then edit so the comment stands but without the actionable words. Sometimes this can't be done without making the comment meaningless so I do not publish. I have been threatened with legal action on a number of occasions but so far (crossed fingers) because of this approach and ensuring I have evidence it has not gone any further.

Thanks, Martin. Understood
But would it be possible to put all the edited-out bits into one bumper xmas annual and publish it anonymously or under an assumed name ( Brent Cross, Alisons Stalker, Kerry Blue, Ken L.Club, that sort of thing) as a seasonal service to your loyal readers?
I'm sure it could be publishing sensation of 2015.

Ha. Now suffering power cut-the buggers are out to silence me. Mobile battery almost out....

Martin - if you ever face the threat of legal action, I know of a lawyer who may be able to advise. His reputation, though, may have gone to pot as I hear he can be barking mad! Ho! Ho! Ho!

This illicit using [of Oyster card]
Cannot be ill, has to be good

If ill why would I yield to that suggestion
whose tempting image might
unfix my contract and make my
grubby principles knock at my public image
against the interests of my cronies?

and everything is but what will be