Cllr  Muhammed Butt today told the Kilburn Times that the Forward Plan notice uploaded on the Brent Council website  that the Cabinet would be making a decision to end the funding of the Stonebridge Adventure Playground  LINK had been 'uploaded in error'.  It is reminiscent of the Tweet sent out inviting residents to speak at a Full Council meeting on a Friday, giving Monday as the deadline which was said to be an error when I applied to speak on the subject of the appointment of a permanent Chief Executive LINK

This is what Cllr Butt told the Kilburn Tines: LINK


The forward plan item considering the future funding of the Brent Play Association was taken down from our website as it was an incorrect version which had been uploaded in error. A correct version will be published later today. (Tuesday).

It is important to note that this funding issue is completely separate from the regeneration proposals for Stonebridge. They are two separate decisions.

Given the fact that by 2018 Brent Council will have had its funding cut in half by government, we are having to review all expenditure across a wide range of areas including children’s services.

But let me be absolutely clear about this, no decisions on either the funding of the Brent Play Association or on the regeneration of Stonebridge have yet been made.

The new version of the item has been posted and a screen grab is below: 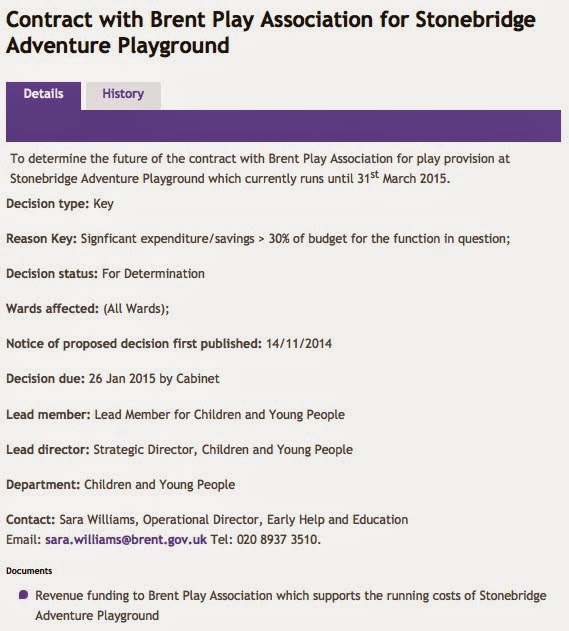 The Heading (below the purple line) was originally published as:


To terminate the funding to Brent Play Association (BPA) at the end of the 2014-15 financial year.

Reason Key: Significant expenditure/savings > 30% of budget for the function in question;

Importantly the 'Decision due' date is now the Cabinet of  January 26th 2015 rather than the original posting of  December 15th 2014.

Whether this is to avoid a headline of 'Brent Council give Stonebridge children a surprise Christmas present - they close their playground!' or some other reason is a matter for speculation.

My hunch is that the original wording of the Forward Plan reflects the Council's true intentions and that Muhammed Butt is fully aware that this is the case.

That local residents, and the children who use the Centre, are being subject to such deceit  is a disgrace.

'Let me be absolutely clear, we will be transparent in our deception..'

A case of - by their errors shall we know them!

The phrase 'let me be absolutely clear about this' is worth a 25 bullshit-points bonus even when a relatively honest politician says it.
The uploading of the item obviously was an error, and a very embarrassing one for Cllr Butt as it turns out. But what was uploaded in 'error' could hardly have been originally typed in 'error' unless the person typing it was momentarily suffering some kind of keyboard Tourette's attack.

Perhaps they think our current campaign will 'run out of steam' by January 26th 2015?
Well it won't!

"Let me be absolutely clear about this" is the political equivalent of "I'm not a racist but..."

Hello, did someone mention racists? Now I could mention a story.....

The nuts and bolts keep falling and the wheels keep spinning. Soon the almighty crash will come. I am just surprised it is all still holding together.

The growing list of issues just shows we are powerless until the day of reckoning.