Firefighters are human too-support our strike for fairness


As firefighters strike again today this open letter to the public sets out their case. Higher retirement ages for teachers ansd firefighters are examples of decisions made on the basis of accountancy rather than the realities of the job.LINK 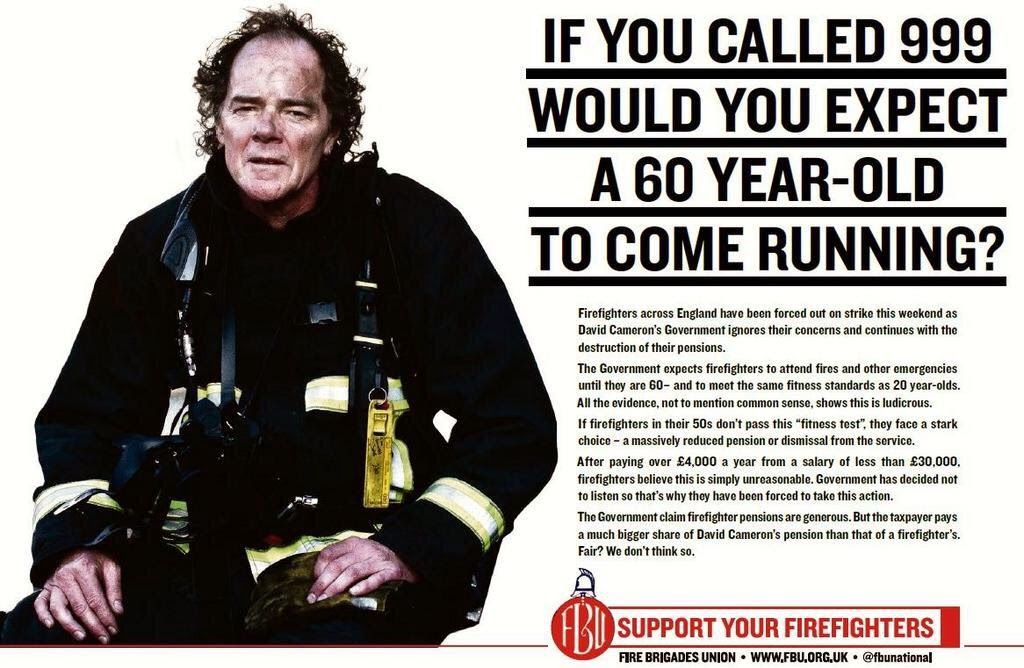 Dear Citizen of the United Kingdom,

It is with a heavy heart that I feel I have to write to you. I am a Firefighter and I feel it’s my duty to explain to you why I have chosen to take Industrial Action. This I’m afraid is the only option I have left. I have spent my working life serving you. I have seen and done things that nobody should ever have to, but I do it and live with the scars because I am Firefighter, it’s what I do. I am there when you need me the most, willing to lay my life on the line to help you and your family in your darkest hour.  I am not a hero, in fact I resent that title. I am a human being just like you, only a human who has dedicated their life to train and train and train again for any situation. Who has fought through heat and smoke to be there when you need me the most. Who has studied for hours numerous cars to know the best way to cut you free. Who has swum in icy lakes to save you from drowning.  This is to name but a few.  I don’t do it for thanks, I don’t do it for praise, I don’t do it for money,  I do it because I am a Firefighter. It’s what I do. The only thing I ask, which I never thought I’d have to, is to be treated fairly and with respect.

The current Government have decided that since the financial crisis, people like me will have to pay for it. People who are easy targets.  This not only includes nurses, teachers, police, ambulance staff and other essential  services, but people who rely on benefits through no fault of their own to survive. We continue to be penalised while the real crooks get away with it. The Government have decided my future and I must accept whatever decision they seem fit.  No negotiation, no looking at any evidence provided, just dictating what I must concede to.  This I can not do.  It is not in my nature to lie down and accept what is unfair and unjust.  I am a Firefighter, the clue is in my title, I will fight for what I feel is right just as much as I would fight for you or your family’s life.

This weekend sees 96 hours of Industrial Action been taken all over England. In Scotland, Northern Ireland and Wales, Industrial Action will be avoided as negotiations have taken place and the relevant authorities have seen sense in sitting round a table and compromising to find a solution.  I am bitterly disappointed that the current Conservative Government, particularly Eric Pickles along with the current Fire Minister Penny Mordaunt  and former Fire Minister Brandon Lewis, think so little of us that this has not been an option.

It has become apparent that members of the public think that I am asking for more pension and more pay. This is certainly not the case, even if the Government let you believe this.  I am not asking for a single penny more.  Just what I signed up to and what I was told I was guaranteed.  The Government have started to lay new pension regulations which will be unattainable for many Firefighters’. The Fire Brigade Union has plenty of evidence to back this up*. In my 50’s, I will be asked to take a fitness test which hasn’t been laid out in writing, so I have no idea what it will involve. If I fail the unknown test I will face the choice of dismissal or a heavily reduced pension.  A decision I feel is immoral for just getting older.  The Government are also taking more pension contributions for longer and then paying out less.  This is unacceptable without any negotiation. The last time I checked we were in a Democracy, not a Dictatorship. My message to the Government is simple. Negotiate with us, don’t put us in a situation where we have no choice but to strike.  It’s not fair on Firefighters or the Public.  You have a responsibility to all of us.  Take it seriously.  This is not a game.

Please do not think that the decision to take Industrial Action has been taken lightly. It pains me that this has been our only option and even now the Government refuse to negotiate.  I wish for no lives to be endangered, but this is only the beginning of our fight.  More cuts are to come.  You will have less and less Firefighters, less and less Fire Stations.  Fire Engines are becoming a thing of the past as 4×4’s and even Mini’s are being used.  I hope that you can support me in this time of need and put pressure on your MP to challenge the way that I have been treated and the way the future looks for your Fire and Rescue Service.  The Government will try to tell you Fires are a thing of the past.  This is not true.  We still face overwhelmingly difficult fires on a daily basis across the UK.  The Government however fail to tell you that flooding has significantly increased. They fail to tell you how the Fire and Rescue Service have had to face new threats with Terrorism as 7/7 showed. We face new challenges with more and more chemicals that are used in the modern world.  The Government don’t tell you that much of what I do isn’t in my ‘role map’ but I do it voluntary so I can deal with anything thrown at me. We may be called Firefighters, but fires are only the start of it.

I implore you to speak to your MP and tell them your feelings. You can find them here http://findyourmp.parliament.uk.   Go out and show your support on the picket lines. Speak to a Firefighter, they will be happy to answer any questions you have.  We need you!  Help us to stand up for the future of not only ourselves, but the future of the Fire and Rescue Service in England.
Thank you for reading.