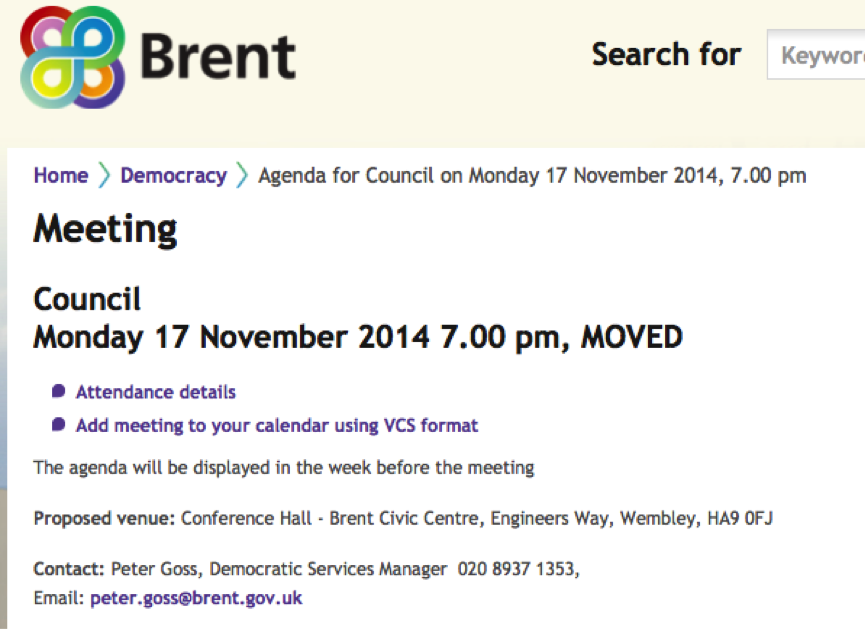 This is the rather terse statement on the Brent Council website announcing the very unusual change in the meeting of Full Council.

Peter Goss gave me rather fuller information just before his office closed on Friday:

Councillors have this afternoon been notified that the Full Council meeting on 17 November has been moved to 8 December in order that the outcome of the consultation on the borough plan can be considered as part of the 1st reading of the budget.  The web site has been amended to reflect this change.

However, this raises rather more questions than it answers.

1. Who made the decision and under which provision of the Brent Constitution?
2. When the Council has a carefully constructed Forward Plan how was this major item missed in the calendar?
3. With the Borough Plan consultation not closing until Friday November 28th, how will it be possible for the Brent officers to compile a report for Full Council in just 5 working days?

I remain sceptical about the reasons for this decision.

One consequence of the three week delay is that some councillors may be caught in the six month rule. This disqualifies councillors from office if they have not attended a council meeting, which they are expected to attend, in a six month period.

Unless some special dispensation is granted, or councillors presently not on a committee are drafted on to a committee that meets before November 24th, there appear to be  three councillors who face disqualification as a result of the postponement.

'Democratic Services Manager' for the current Brent Council, eh?
What's the worst job you ever had?

Cllr John Warren has asked about the decision and says: The council is relying on Annual meeting decision that allows Democratic Services Manager to make changes to Council and other meetings "deemed necessary"!

There is the bit about consultation,but I was not consulted.

So another 'Officer decision' just as Philip Grant has been told by Fiona Ledden (Head of Legal) that the decision to appeal the Employment Tribunal was an officer and not politicians' decision.

This is all very very odd indeed. As the last chair of Finance Scrutiny, I can tell you that we had a very set structured timetable laidout for our work programme, and that included precise milestones for preparing for first reading debates. A further point is that councillors should not have been "notified", they should have been consulted - indeed, this sort of action is normally decided at full council!

We did tweak one Finance meeting date, from memory, to make sure the officer we needed could attend, but that decision was ultimately mine, as chair, having consulted members.

Brent always was prone to being run by officers - it drove Lorber mad, and he was forever challenging that. It's got worse, it seems. I suspect much of that is down to the reluctance of Labour councillors to step out of line and also the fact that so many of them are inexperienced in the extreme. And I don't just mean those elected in May.

Oh dear Alison, your rewriting of history is quite bizarre - "Lorber challenged that", when in fact Lorber was known for his poor grasp of detail which enabled officers to completely run rings round him. He was just as much of a shambles as Butt is, if not more.

Lols at "how will it be possible for the Brent officers to compile a report for Full Council in just 5 working days?". Its a Brent Council consultation Martin, the report was written well before the consultation even started.

Apologies for a lapse in my cynicism! Christine Gilbert is down to speak on the ;Borough Plan-
proposals for partnership structures and community engagement activities' at Scrutiny on November 26th, two days before the consultation closes.

At least Lorber had some integrity, the same as the officers who were there at that time. Can't say the same for Butt and his merrymen and his yes men known as officers.

Sorry but does anyone know the status of the three councillors mentioned in the article in terms of by-election?

If the meeting is only held in December, will there be a forced by-election or not?