Trinity Mirror today announced the closure of 7 of its regional titles including the Harrow Observer and thus its offshoot the Wembley and Willesden Observer (WW0).

The WWO recently lost its well-regarded Brent reporter Tara Brady and the Brent brief was subsumed into the role of an existing Harrow Observer reporter, John Shammas.

For some time the WWO has mainly had one main Brent front page story and perhaps a handful of others in a paper dominated by Harrow news and Harrow letters. Its 90p price tag, where sold, thus represented poor value for money.

At the same time Trinity Mirror developed its Get West London website for digitial news and Wembley became just one of a long list of links on its news page. The Wembley link takes you to the page below which as you can see in no way replaces what a local newspaper can offer. 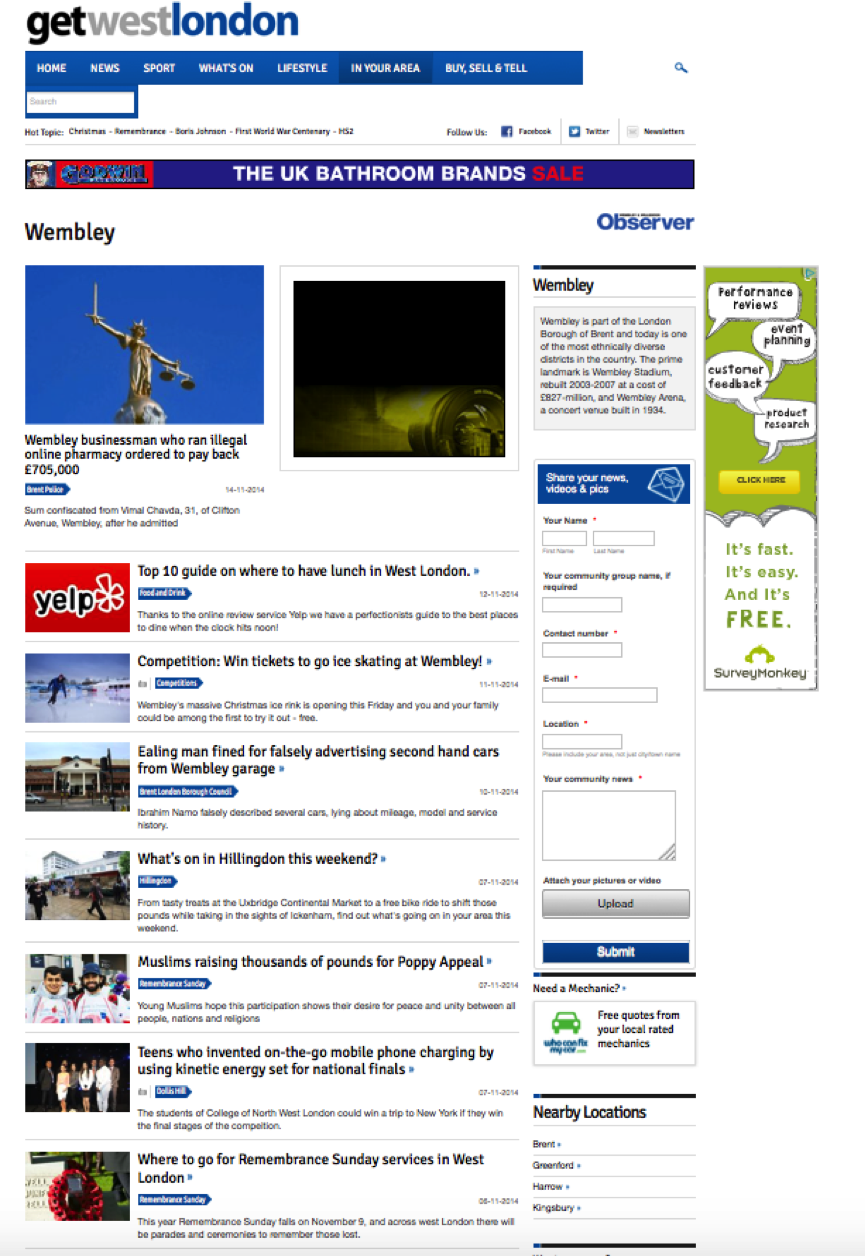 
A radical new structure is being implemented across the west London titles in Uxbridge, Ealing and Hounslow that focuses on driving more traffic to the getwestlondon website. The newsrooms are being restructured to support a revised print portfolio while concentrating on accelerated digital growth.

We intend to withdraw from the Harrow market and the Harrow Observer will close.

The Press Gazaette, covering this story, publishes an extract from an article by Mike Lockley, who by coincidence write it to mark his 25th year as editor of the Chase Post which is now to close:


Occasionally, the national newspapers will be intrigued enough by a tale to write ABOUT the people of my patch - I write FOR them. Their reporters can get the facts wrong, ruffle feathers, then disappear into the distance. I can’t because there’s always someone in the street ready to loudly broadcast the inaccuracies.

I still can’t believe I get paid for spreading stories. You might call it gossip, but one man’s tittle-tattle is another’s key local information....

I’m something of a dinosaur. I know this because the exasperated IT expert who spent a week trying to teach me computer skills called me a dinosaur, or was it a fossil?
I may not have the new technology skills, but I have a contact book crammed with 'curtain twitchers' and devoid of numbers for gushing PR gals, usually called Gemima, Hannah or Suzi. Poor 'Hannah' rang, close to hysteria, this morning to proclaim: 'My client’s done something reeeeally exciting with milk.'

He hadn’t. It’s still white and hasn’t started coming out of cows’ noses.

And I, like every other weekly journalist, can play a part in the community I work in. I’ve helped save schools, stopped telecommunication towers being erected and even put pink custard back on a school menu.

Times and technology change, people’s desire to know what’s happening in their community doesn’t. A town without its own weekly newspaper is a town without a heart.

I have written before on this blog about the importance of local newspapers for ensuring accountability of local councils, particularly at a time when the council has an overwhelming majorority, an ineffective opposition and poor scrutiny.

In its heyday, which for me was during the libraries campaign, the Willesden and Wembley Observer did a terrific jon in supporting the local community. The Kilburn Times is currently backing the fight to keep the much loived Stonebridge Adventure Playground open.

Now the Kilburn Times is left to do the job on its own but it too isn't unscathed in the present climate. News Editor Lorraine King's role has been changed with much more of it devoted to digital content and last week its most recent reporter, Myron Jobson, left for Financial Times feature writing. Nathalie Raffray from the Ham and High, another Archant newspaper, is filling in at present.

The Kilburn Times has seen a reduction in the number of its pages, as well as the number of reporters, and advertising takes precedence over editorial space affecting the number of stories carred as well as whether there is room for a Letters Page. The latter is again an essential ingredient of local democracy.

Down to one and a half people to produce the editorial content, the Kilburn Times, is only slightly over the staffing level of this blog!

Aside from the impact on our local community let's remember the 50 or so people who will lose their jobs as a result of this closure. I'd like to express my sympathy to them and their families as they face a dismal weekend.