Governors urged not to panic over government academisation policy: 'seize the agenda and be collectively creative' 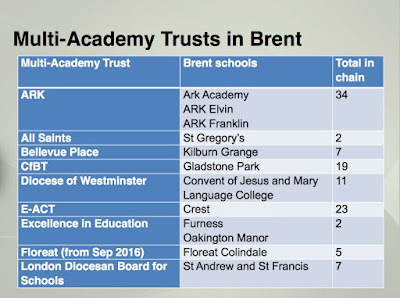 Gail Tolley, Strategic Director of Brent Children and Young People, advised governors at this weeks Governors Conference, not to be panicked into action on the Government's aim to convert all schools to academy status.


There is no time pressure for schools to panic themselves into action - you have the opportunity to pause and reflect on what action to take.

The immediate time pressure disappeared when the Government backed down in the face of opposition from Tory MPs and Tory shire counties.  Academisation of all schools remains a long-term objective but the legislative timetable is unclear ion the light of recent events.

The Government retains the policy of  triggering mass academisation in local authorities which are deemed to be failing or where the number of academies has reached a tipping point where there are so many academies that LA management of the remaining LA schools is not viable.

The Senior HMI in Brent has told Ms Tolley that Brent is now a 'light touch' local authority and meetings with the HMI will now take place on an annual, rather than termly, basis.

However the local authority will come under pressure financially due to the changesin the National Funding Formula LINK and the phasing out of the £3m Education Services Grant.  There may also be reductions due to the loss of European funding.

The local authority will retain core responsibilities:
The collaborative BSP (Brent Schools Partnership), run on a school subscription basis, will undertake more education and training and school improvement functions. LINK Its Strategic Director, Farzana Aldridge, told the conference that most Brent schools, whether LA, voluntary, academies or free schools, were now part of the Partnership.  They had offered 'neutral' information sessions on academisation.

In discussion it appeared that various options were on the table including the LA itself, or perhaps  the BSP, setting up multi-academy trusts of Brent schools.

The role of the Regional Schools Commissioner (RSC) came under some scrutiny. Our RSC is responsible for a large chuck of London and large areas of the South East outside London. They have powers to convert schools deemed failing to academy status and can over-rule the local authority. The RSC capacity to intervene with particular schools at a detailed level is extremely limited.

A new provision is that the LA and governing bodies now have a statutory duty to assist the academisation process in these circumstances.

A further change which has not received much publicity is that LAs will have to comply with a request by the Secretary of State to transfer its land (not just 'education' land) to the SoS for free school or academy use.  This involves a major loss of local public land to the government. Currently the land is leased to the free school or academy at a peppercorn rent for a 125 year lease.

The question for me is whether the LA can survive the forthcoming financial cuts sufficiently to maintain the borough's current success in its oversight of schools and thus avoid a 'failing local authority' designation leading to forced academisation.

Gail Tolley remained optimistic telling governors they had the opportunity to 'seize the agenda' and be 'collectively creative and make a focused response.'

She emphasised that it was extremely important for governors to respond to the second round of consultation on the National Funding Formula - this is clearly vital given the potential impact of cuts.

Cllr Wilhelmina Mitchell Murray, the new lead member for Children and Young People, did  not intervene on any matters of detail but told governors that the voice of parents and governors was important. She asked. 'What do you do with failing academies?*' and said that the government should concentrate on 'running the country - not running our schools.'

* The answer is hand them over to another academy trust. They are not allowed to revert to LA status.