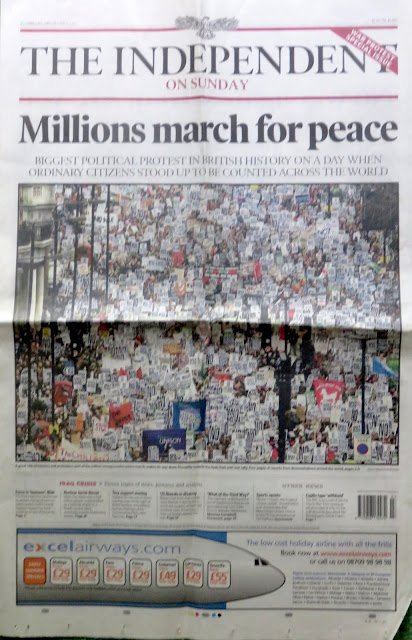 Caroline Lucas the Green party MP, said today that the report is 'damning' and shows that Blair and colleagues 'lied' to the public about their reasons for going to war.


“Chilcot’s report is damning for Blair, his cabinet and all those MPs who voted to take this country into an illegal and immoral war in Iraq. Iraqis continue to pay the price for an invasion that took place long before other options for a peaceful resolution were explored.

"This report confirms the series of serious failures that led to this disastrous war. We know for sure that Government Ministers, including Tony Blair, lied to the public about their reasons for going to war. He said he would support George Bush ‘whatever’ eight months before the war – and thousands of lives were lost because he stuck to that promise despite the evidence in front of him.

“This report confirms that Blair had indeed decided to back the Iraq war far earlier than he has previously admitted. His claim that it was a war solely to eradicate WMDs is now in tatters. Blair knew he would never have garnered enough support for regime change, so he lied to Parliament and the Public to invade Iraq.

“We can now see the consequences of this horrific war: many thousands of civilians dead, hundreds of British troops killed and injured and continued civil wars raging across the Middle East.

"Ultimately we should have never needed this report because MPs should have taken note of the clear evidence presented to them and voted against the war. There's no doubt that Tony Blair should take much of the responsibility for this disaster - but every MP who closed their ears and eyes to the facts and voted for the war should now publicly apologise.

"411 MPs walked through the lobbies to vote alongside Blair for the Iraq war - and both parties need to take responsibility for that. The Prime Minister is the only leader in Westminster to have voted for the war and he should apologise in full for doing so.

"Parliamentary and constitutional failures are a constant feature in this report. The relevent checks and balances were not in place and we need to urgently explore how we can better hold the executive to account in this country.

"Moving forward from today it's crucial that we learn lessons. That's why I'm demanding that the Prime Minister today joins me in calling for all future votes on military intervention to be unwhipped - so MPs use the facts and their conscience as their guide rather than threats from their party machinery."

Stop the War Coalition responded to the Chilcot Report with this statement:


The Chilcot report is a damning indictment of Tony Blair and those around him who took us to war in Iraq.

The report vindicates Stop the War and all we have been campaigning for over the years.  This report would not have happened without our campaigns and our ceaseless demands for Blair to be held to account.

It clear that Blair used lies and deception to get his way, that the war was unnecessary and illegal and that everything was done to ensure it went ahead.

The victims are the Iraqis, those soldiers who died and were injured, but also the whole political system traduced by this process.

The anti-war movement and the millions who marched were vindicated by this report and we now demand justice.

We welcome the fact that this report is so damning but for us this is not the end but the beginning. Meetings should be held in every town and city around the country. There must be legal sanctions against Tony Blair and he should no longer be considered fit for any office.

If you are in London, join us tomorrow (7 July) at the People's Response to Chilcot public rally at Mary Ward House at 7pm

Reacting to the publication of the Chilcot Report, Natalie Bennett, Leader of the Green Party of England and Wales, said:


“The Green Party believes the report’s final confirmation that the Iraq war was ‘not a last resort’ and that the British government decided to invade before all the peaceful options had been exhausted is a verdict that must produce action. We must not just say 'never again' but act to make that fact.

“That the judgements about the severity of threat posed by Iraq's weapons of mass destruction were presented with a certainty that was not justified is simply inexcusable. Never again must the executive be able to lead us to war based on massaged information.

“And never again should MPs be told how to vote on such a critical matter. The Government should, immediately, announce that all future military interventions will have unwhipped votes in the House of Commons. We must never again see MPs being cajoled into voting along party lines when their conscience tells them otherwise. No MP should answer when asked why they voted for war 'I was told to.'

"Those MPs must be given genuinely independent legal advice about the legality of the action. They must know it is their responsibility to act legally, and that they could face sanction if they don't live up to it."


"The Green Party is resolutely committed to finding non-violent solutions to conflict situations and unequivocally opposed the war in 2003.

"The headline points of this mammoth report are chilling, yet unsurprising to all those who have been calling for Blair to be investigated at the International Criminal Court.

"Whether on grounds of Blair's intent to bypass the UN, diplomacy not having been exhausted, or critical papers being denied to the Foreign Office, I support those renewed calls for a criminal investigation."

The Establishment finally acknowledges what the People knew from the start. BLIAR - it's official.

Blair and his ministers were not only into lying about Saddam Hussein and Iraq, but also portrayed the bulk of benefit claimants as 'benefit thieves' that the DWP were 'closing in on'. He also unleashed an investment banker on the vulnerable as his 'welfare reform' guru.

A Kilburn Unemployed blog post PR as public relations in politics and the selling of jobcentre-funded training in the Tony Blair era looks at other aspects of Blair's use of Public Relations in the treatment of jobcentre clients.

Yet a November 2006 report from Community Care magazine looked at Government abusive neglect of benefit claimants that was much less reported than the 'closing in on benefit thieves' message. Jobcentre Plus: Poor service contiues.

More specifically regarding the prelude to the Iraq War, see The benefit claimant, the muggers, the Prime Minister's 'spin doctor', the Spectator article and the Mail on Sunday