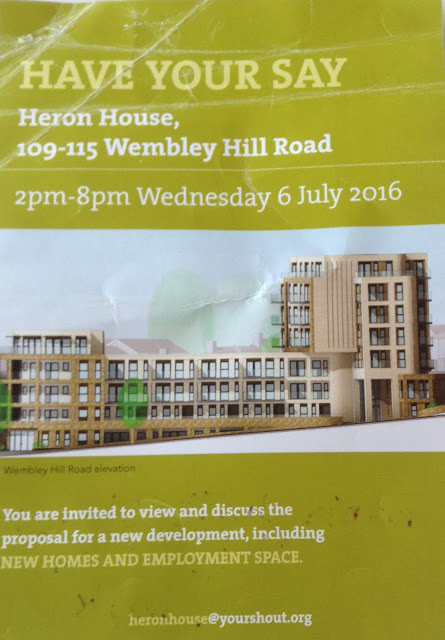 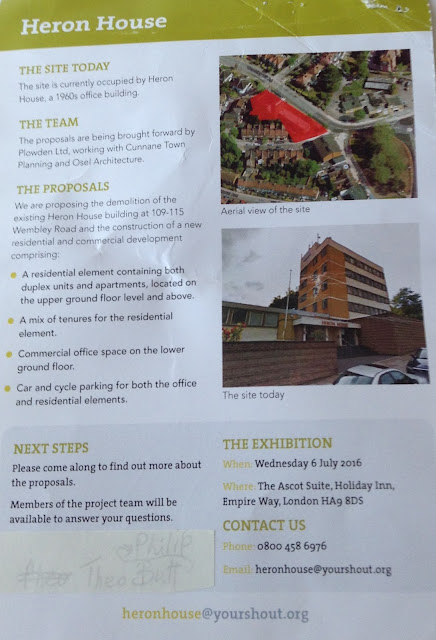 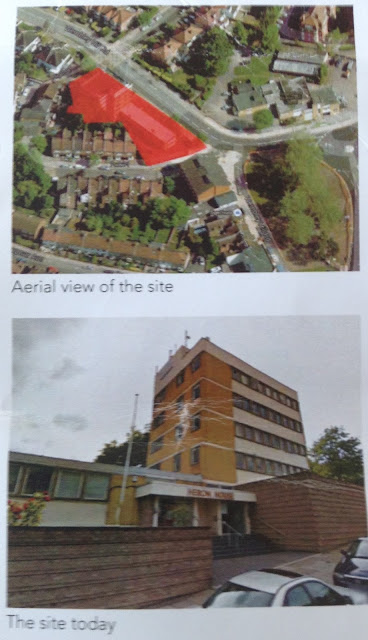 When high-rise redevelopment began around Wembley Station it was clear that it would impinge on the bordering  suburban residential areas and particularly the main thoroughfares of Empire Way, Wembley Hill Road and Bridge Road.

"The Wembley Residents Pressure Group Against The Large Redevelopment of Heron House"  are preparing to fight this and we really need your support to sign our petition, which will be emailed to you in due course.

I will  send you the petition to sign, after the developers  apply for planning permission. This will be at the end of this month. (Their usual ploy to do it in high holiday season!)  We  will then only have 21 days to object, so we need to be prepared.

Those of us who live in Wembley can expect 11,000 high rise dwellings in the regeneration of the Stadium and High Road Areas. As this regeneration was planned many decades ago, it is a "done deal" and their progress will continue and we can only hope that it will be of benefit to all the residents of Brent.

But, there are still the  smaller high rise developments, which are intrusive and are creeping into residential streets, completely destroying our way of life.  One of those is the proposed redevelopment  of Heron House on Wembley Hill Road,  into expensive high rise flats and commercial businesses.

Wembley Hill Road and all the street off it are totally residential and the existing Heron House was built in the '60s and is not as intrusive, overbearing or dense as the new development will be. The new development is much larger and certainly not in keeping with the character of the streets on and off Wembley Hill Road, which consists of houses, bungalows, small blocks of flats and gardens.

As the Stadium and High Road regeneration  has already planned 11,000 dwellings,  any more high rises in the very near vicinity would have an negative impact on the area with loss of light, privacy and the existing outlook.

It is very unlikely that there will be enough parking space for all the vehicles from the flats and the commercial businesses.   This will be putting even more pressure on the streets around  Wembley Hill Road, where there is already a huge demand for parking spaces and it is almost impossible to find one.

If this large high development is allowed, it will also set a dangerous precedent and before long more developers will want to do the same. This will completely destroy our residential areas,  which we are all trying to hold onto, despite the looming high rises of the Stadium and High Road areas.

These same developers have already expressed an interest in purchasing St Joseph's,  the land opposite Heron house, with a view to building yet another high rise block! We cannot just sit back and do nothing. The more signatures we can get on our petition, the better our chances of stopping these high rise buildings, which are so out of character for Wembley Hill Road and the streets off it.

Due to the height and proximity of this development, it will also devalue our properties, most of which were built in the 1930's and were part of conservation areas before the law changed.

There are many brown-field sites in Brent, where this part/commercial development can be situated and these should be used before encroaching onto our streets and furthermore, what provision has been made for the infrastructure needed?

I am trying not to be too pessimistic, but  these smaller high rise dense developments,  which are causing great concern amongst residents, could happen anywhere and before you know it the whole of Brent could  become a concrete jungle!  I wish I could say with certainty that this will not happen, but the speed with which  these smaller high rises are going up, I am truly fearful.

I love where I live and have lived in the same area for almost 60 years. I know things have to change and progress, but do we have to lose our precious existing residential areas for even more high rises? Surely Brent Council should be aiming for both?

We of course appreciate that more houses are needed, so we propose and would be happy to support lower level affordable family accommodation perhaps some with small private gardens, as this is just the sort of dwelling which is in very short supply

Tucked away behind the Heron House site is the little known heart of old Wembley. You may think that "the High Road" is the centre of Wembley, but here you have the original High Street.

Wembley Green, the open space now with the BEE "Wembley Lion" on it, was at the centre of the small settlement which was "Wembly" in the mid-18th century, and possibly the location of the original "Wemba Lea", the Saxon clearing in the woodlands that was first recorded in AD825.

The High Street, off of Wembley Hill Road, was the main street in Wembley 250 years ago, and a walk up the steep footpath from there to the "Green Man" (or "Barley Mow", as it appears on a 1745 map) takes you past a row of narrow "workmens' cottages" that are part of Wembley's past as a small agricultural community.

I hope that whatever is built on the Heron House site will not be allowed to spoilt the character of this quiet, historic backwater.

Philip (with my Wembley History Society hat on)

As ever Philip you are the voice of reason, as Zerine suggested why would they not replace hideous Heron House with some 3 bed family homes with gardens more in keeping with the surrounding area. Maybe its because Brent Council does not have a Design and Conservation Officer in their Planning Department like many other councils. If this was the case the first stop for any Developer would be to consult the officer prior to putting forward any large development. I cannot for the life of me see where this sits in the Borough Plan or the Wembley UDP, but then I can't figure out why we are still calling the Quintains Concrete Jungle "Wembley Park" when the "Park" element is now non-existent!