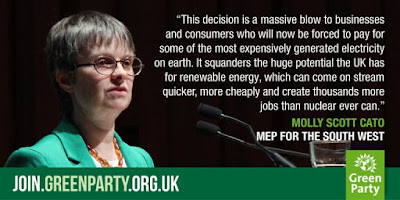 The government's decision to delay a decision on the EDF Hinkley nuclear power station forced newspapers to rapidly revise their late editions obernight.  Before the delay announcement Molly Scott Cato, Green MEO for the South West, released the following statement:


This decision is a massive blow to businesses and consumers who will now be forced to pay for some of the most expensively generated electricity on earth. It squanders the huge potential we have for renewable energy resources in the South West. This is the sector where our efforts should be channelled; renewables can come on stream quicker, more cheaply and create thousands more jobs than nuclear ever can. Given EDF’s record to date, both here in the UK and in building other similar nuclear reactors elsewhere, we can expect further delays, even higher costs and blackouts to follow.

This project is totally discredited. EDF is not trusted either by its shareholders or many of its employees, both of whom have expressed grave doubts about Hinkley. The only thing that keeps this white elephant stumbling along is a blind ideological obsession with nuclear power from the Tories and a determination to show that Brexit Britain is still open for business. This is one business we could all do without.

EDF's announcement came on the day another board member of the company resigned, describing the project as “very risky” and saying he expected EDF to move towards renewables instead of pursuing more nuclear power.

Just days ago the National Audit Office proclaimed renewables as a cheaper option and the now disbanded Department for Energy and Climate Change estimated the cost of keeping its promise to EDF has increased to £37bn over the life of the project.

It was also revealed last weekend that French finance authorities raided the offices of EDF due to suspicions over whether the company was reporting information accurately to shareholders.

M Scott-Cato on Any Questions this evening.