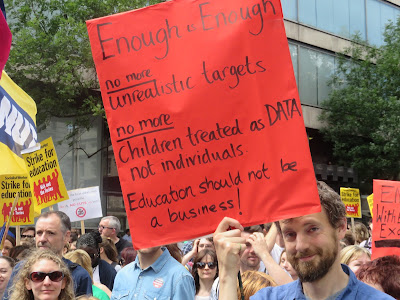 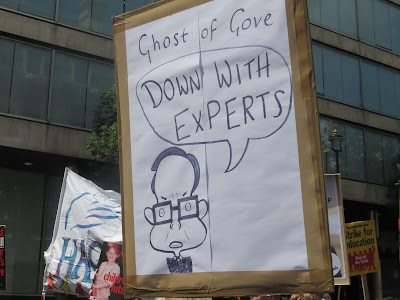 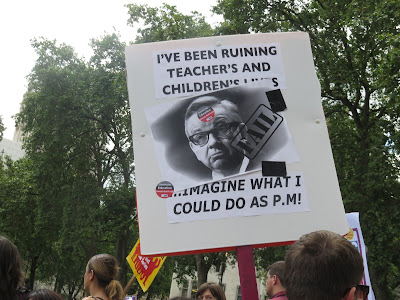 Nicky Morgan cried crocodile tears this morning over children losing a day's education because of the NUT strike.  What the SATs results proved, when they were released this morning, is that she has wasted a whole year of thousands of children's education in which teachers have had to sacrifice real learning to 'teaching for the test'.  Tests which are based on a hastily and poorly revised curriculum with no evidence base, lambasted by expert educationalists and far too difficult for the majority of children.

With local reports of reading results down as much as 30% it is no wonder that Morgan quickly moved to say that the results were not comparable to last year.  She had to escape blame for the sudden drop in pupils' performance and instead congratulate herself and the government on their 'higher expectations'.

On top of the stress children and teachers suffered in the Gradgrind weeks before the tests and the stress of the tests themselves which saw many children reduced to tears, I now hear of children feeling deeply distressed and despondent because they 'haven't reached the required level' - some have gone weeping to their headteachers seeking comfort.

Eleven year olds seeing themselves as failures was something that happened in my childhood as a result of the 11+ examination - now Morgan and the Tories have introduced it to a new generation. That sense of failure can carry on throughout life.

At the same time Year 6 teachers and teaching assistants, headteachers and deputies, will also be feeling that they have somehow failed - although they know the demands were unrealistic, the preparation time inadequate, and the educational justification for the tests non-existent.

Worse some will be feeling guilty about the pressure they exerted on children in order to try and get them through the tests, knowing that it was unreasonable and unjustifiable in terms of their own professional integrity. They will feel that they colluded in something that damaged children even though they tried their hardest to protect them.

Then there are the parents left trying to comfort their child, persuade them that there is more to life that SATs, and perhaps worrying that somehow their child is just not capable of making the grade.

Today's strike was officially about funding, pay and conditions, and workload. Teachers cannot legally strike about the curriculum or the heartless ill treatment of children, but that was clearly a concern demonstrated in the many placards carried by the marchers today.

The long-term impact of Morgan and Gove's education policies will take years to emerge but I am right behind teachers, headteachers, governors and parents who are working together to ensure that the next cohort of pupils will not have to go through a process that amounts to mental cruelty.

Now is is time in the last weeks of term to pick up the pieces and rebuild children's confidence so that they do not start secondary school with low self-esteem and an expectation of further failure.

Taxpayers Against Poverty could argue that low SATs scores indicate lack of adequate nutrition for learners on account of low household incomes, as benefit levels are too low to maintain adequate nutrition for brain development. The reduced 'overall benefit cap' under Universal Credit that the Conservatives voted in last year could lead to progressively worse SATs scores.

What is the government trying to measure?

In this case the SAT results are not comparable to the previous year as the curriculum content and testing regime has been changed. The bar has been raised so more children 'fail'.

Part and parcel of Underclass Theory 'policy-driven evidence-gathering', perhaps? You know, "These people were born to fail, and so they are not worthy of government support," and all that rubbish?