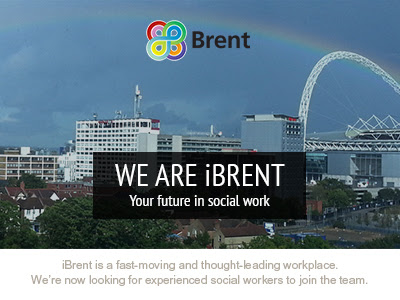 Sometimes we humble residents are unaware of how Brent Council is promoting itself outside the borough. Perhaps our experience of broken pavements, unfilled potholes, flytips, uncollected waste bins, unanswered telephone calls to the council, trouble free approval for nasty new developments and dodgy decision making blinds us to the shiny new world that the Council is busily building in public relations land.

Stephen Hughes, interim director of resources at Brent Council in London, said that IT had the capacity to transform services “in lots of different ways”.

However, he said that, although it was better to improve IT, “you can do an awful lot even if yours is not the best”. Councils could still get a lot out of commercialisation by rethinking their approach to services, he said, even if their IT offering could be improved.

Hughes said that his council was using shared services as a route to commercialisation. He noted that Brent are running the IT for the London General Assembly and Lewisham, as well as running the registration and nationalisation for Barnet and were in discussions for doing the same with Harrow.

All the speakers at the event stressed that, although commercialisation had been driven by increased austerity, it was something that councils would be working on anyway.

Advice for councils on how to increase revenue in this way included exploiting their brand and public trust - which Hughes said was important when getting involved in commercial enterprises – and focusing on customer needs.

Over at Community Care Magazine Brent Council extolls the range of gizmos that Brent Coucil offer in an advertorial LINK I hope sharp-eyed readers can spot the typo which exposes a deeper truth about the borough (and why is the borough referred to as 'Wembley' - rebranding?  That will get Kilburnite gnashing their teeth!):

iPhones, iPads and Zipcars, typically once-in-a-blue-moon luxuries, are the norm for their social workers. They enable them to work more flexibly and recently revamped their work environment into a high-tech Civic Centre. Which of course are much-deserved conveniences for social workers and signs that Brent care about their employees. It’s why they are one of the country’s 5% of employers to be awarded a Silver level Investors n People accreditation.

But crucially, these tools also unlock a better quality of care. They mean that social workers can spend less time in the office and more with the children and families that need their help. The iPad even provides a useful engagement tool, with games that can, for example, help a troubled child to open up. To serve Wembley, one of Britain’s most ethically, economically and socially diverse boroughs, arming social workers with a suite of such exercises is a major boost.

Thanks to Alan of Kilburn Unemloyed Workers Group  for drawing this item to my attention.

'one of Britain’s most ethically ....... diverse boroughs': with Butt as leader, what else could Brent be?
Seriously though, why does this read like a Google translation? Surely they should use someone with English as their first language to write these things.
'these tools also unlock a better quality of care'
'arming social workers with a suite of such exercises'
You really have to despise the English language to write stuff like this.

Thing is Mike that they probably are unable to find anyone with English as their first language - the last ones probably gave up and found a job elsewhere or took redundancy or retirement a couple of years ago. Also this mumbo jumbo language is is probably encouraged as they know that most people will give up after struggling through the first three lines, their brains having scrambled, that they can waste money hand over fist and service their egos without limit.

What the silver they didn't get in 2012 as some staff who were interviewed spoke up, they had to try again before they could get it. Lol

These examples of how Brent is being "sold" to the outside world are a result of how the Council's PR department was being enlarged during Cara Davani's reign, while at the same time she stopped the recruitment of social workers because "we couldn't afford them".

Now Brent is filling some of the much-needed social worker posts, but we are still left with the PR "spin". And, hopefully, post-Davani, Brent does care for its employees!

Exactly. It sums up the situation entirely!!!!

I am so happy my hard earned Council Tax money is being spent on iPads for children who are on the at risk register to play games on "to open them up" what do the parents get? A Mac Air Book? Free Broadband and iPhone 6s? What a load of BS. I find it incredible that Brent Councils Website is not fit for purpose and yet they want to sell it on to other boroughs? Buyer Beware is no joke