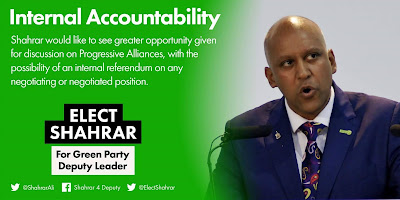 Shahrar Ali, a contender for deputy leadership of the Green Party, a post he currently holds, has called for a possible internal referendum on the negotiating position the party should hold in an discussion on a Progressive Alliance with other parties.

In a Facebook posting over the weekend Ali wrote:


I've been on two leadership hustings this weekend and I must say one of the most controversial topics of engagement was on Progressive Alliances. I believe there's been a mismatch between our public pronouncements on the matter and member expectation. It's imperative we don't get the cart before the horse.

He followed up this somewhat opaque statement stating:


It does frustrate me sometimes when we [the Green Party] appear to cut corners. Engagement and consultation were never meant to be easy, but it's a mistake to think of due process as an encumbrance. To the contrary, those of us in position of responsibility have obligation to engage and not circumvent. Better decisions will result.

Other posters express concern that the party is moving towards a top-down model where leaders make policy rather than members, The Progressive Alliance idea was strongly backed by Green MP Caroline Lucas LINK who is a candidate for the leadership position on a job share basis with Jonathan Bartley.

Green Left, the eco-socialist grouping within the Green Party of England and Wales,  adopted the following position on the Progressive Alliance at its last General Meeting: