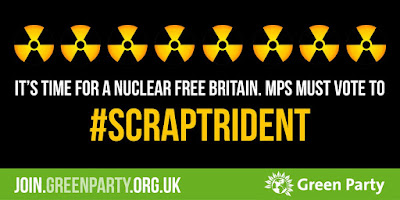 Green activists are organising to be at the Stop Trident demonstration tonight at 6pm, Parliament Square, London:

On the 18th of July Parliament will vote on whether or not to spend at least £110 billion on replacing Trident, Britain's nuclear weapons system.

The Green Party has long been united in the belief that we must decommission the UK’s nuclear weapons.

Please join the protest outside parliament on Monday, so MPs debating the future of Trident know the strength of the movement against nuclear weapons.
Posted by Martin Francis at 08:18:00