Transport for London will introduce the changes to the 83 bus route and the new 483 bus route tomorrow.

TfL's commentary on issues raised in the consultation, including issues around congestion on East Lane, Wembley for the 483 service can be found HERE,

Wembley Hill Road will be served by a bus route (483) for the first time.Wembley residents wanting to travel to Ealing Hopsital will no longer be able to catch a bus at Wembley Park station but will instead need to walk down to Wembley Hill Road/Wembley Stadium station for the 483. The 83 will now finish at Alperton.

The N83 will continue to run from Golders Green to Ealing Hospital at the same frquency as now. 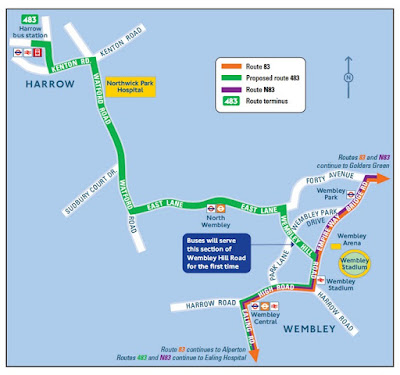 We received 657 responses to the consultation. 645 responses were from members of the public and 12 were from stakeholders.

57 per cent of respondents supported or partially supported the proposal to shorten route 83 to run between Golders Green and Alperton and not continue on to Ealing Hospital. 22 per cent said they did not support the proposal, 5 per cent were not sure, and 15 per cent had no opinion or did not answer.

77 per cent of respondents supported or partially supported the introduction of new route 483 which would run between Harrow town centre and Ealing Hospital. 11 per cent said they did not support the proposal, 3 per cent were not sure and 9 per cent had no opinion or did not answer.

We have considered all of the responses and have decided to go ahead with the proposals.  We plan to introduce these changes on 10 September 2016.