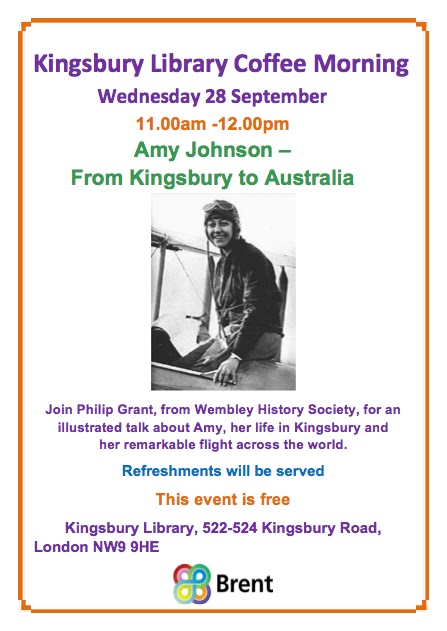 In a further example of Brent Libraries working with local voluntary organisations Philip Grant will be speaking about another famous former Brent resident on Wednesday 28th September:

In 1929 a 26 year-old typist came to live in Kingsbury. Within a year, she had become one of the most famous women in the world, after flying solo to Australia in a light aeroplane. Kingsbury Library invites you to join Philip Grant, from Wembley History Society, for an illustrated talk about Amy and her remarkable flight to Darwin, via Vienna, Istanbul, Aleppo, Baghdad, Bander Abbas, Karachi, Calcutta, Rangoon, Bangkok, Singapore, Java and Timor (what did these well-known places from recent history look like in 1930?).

Amy Johnson had the rare distinction of having a song written about her achievements that became a hit. The record was innovative in including sound effects and commentary extracts:

I was delighted that more than 40 people came to my Amy Johnson talk at Kingsbury Library this morning, and seem to have enjoyed it.

I have been invited to present the talk again at Preston Community Library - if you missed it today, look out for details of a second chance, some time before the end of the year.