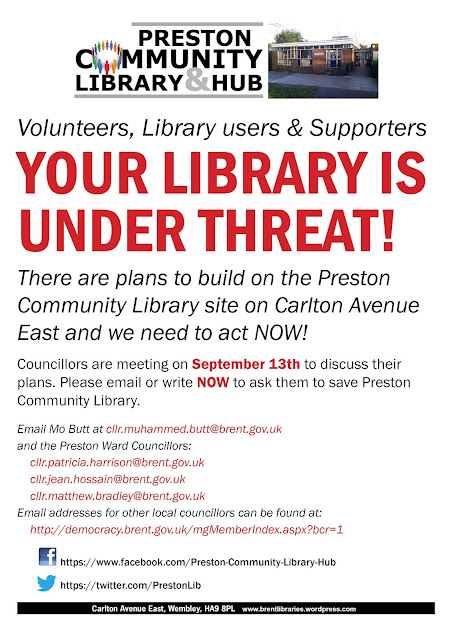 Ahead of Tuesday's Cabinet Meeting, Roxanne Mashari, has written to Philip Bromberg in response to his letter LINK about the future of the former Preston library building (referred to in the Cabinet report at the Preston Park Annex LINK)

For the record, I have met with you and your group on a number of occasions and have found our conversations constructive which ultimately have led to the operation of the community library.

I hope we can collectively find a solution to this as I think your community library is a fantastic example of community action to keep services running in the face of government cuts and I hope the council can support your hard work, passion and commitment as much as possible.

As I said previously, unfortunately property has been removed from the regeneration portfolio but I expect the leader will respond to you fully as soon as possible.

Cllr Mathew Bradley has also responded to correspondents with the following generic reply:


As I have received a large number of emails about this, I've put together this standard response which I hope will answer all your questions.

Thank you for the numerous emails I received about the Preston Community library. As per your requests, we raised your concerns at the Labour group meeting to try and give a clear steer to the cabinet about what we, as Labour councillors (and specifically Preston ward councillors) wanted to see the building being used for - a community library. I think we made this clear in the meeting. The case for the library has been made well by all of you and I want to thank you all for writing in as the level of public support for the community library was made very clear and lent weight to what we had to say.

As an educator, I am firmly on your side in this matter, and I know my fellow councillors, Pat and Jean, feel the same way. We have been impressed at the service which has been provided by the Preston library community group (often in adverse conditions) and hope that this will continue into the future.

At the next meeting of cabinet, they will be deciding whether to enter negotiations with the business next door to see if this property can be purchased by the council in order to start re-development with a mind to building a structure on both sites. The ground floor of this will be reserved for community use, the upstairs area may become flats, or something else, but as far as I am aware the purpose for this has not been decided.

If the community library were to take up residence on the ground floor this would get the library a permanent home, and I believe would be an excellent solution to the many issues the library group has been facing when working with the council. While I can see positives and negatives to this, as a supporter of the library, I feel that this might be the best possible outcome.

Of course, if this happens, the next big fight would be ensuring that the ground floor of this building is indeed used for the library. The work on achieving this is far from over and I thank you all for continuing to support the community library as robustly as you have.


First of all, I'd like to thank you and Jean (Cllr Hussein)  and Pat (Cllr Harrison) for the support we've had from you over the last two years. Some of the recipients of this email will be unaware that you have done valuable work for the library, and that you've offered to do more for us in the future. We are grateful for your help.

However, I'm afraid that what you say about next week's Cabinet is highly misleading. The report is not simply about negotiations with the business next door. There are two recommended proposals, and both involve the re-development of the library site. In both cases, the ground floor community space will be put out to open market tender, with a target rental income of £51,000 per annum. How, in these circumstances, will it be possible to ensure that there is a library on the ground floor?

Two years ago you and Pat and Jean and every other Labour councillor fought an election on a promise to offer the current building for use as a library at a peppercorn rent, and without an open tendering process. Is this promise about to be broken?

I hope you have read the attached letter from the Chair of SKPPRA, which casts considerable doubt on the wisdom of the current plans. Our strong preference is to continue to run the library in the existing building. This is what was promised in May 2014. But any re-development of the site must be done in a way which is consistent with those promises made two years ago. On Tuesday the Cabinet must say clearly that any community space must contain our community library, which must be offered to us for a peppercorn rent. That is what you now need to tell Mo and the other members of the Cabinet.

The decision about the library building is due to be made on Tuesday but both Brent Conservative groups have put it on the agenda for the following Full Council meeting on September 19th.