The Council has managed to achieve some good public relations with architects over its redevelopment of South Kilburn but it doesn't seem to do as well at handling good relations with the public who live on the estate and use its facilities.

Parents of children at Granville Plus Nursery School are very concerned about the future of the nursery, the lack of information provided to them about the plans and shortage of time to comment on proposals.

The nursery,  funded by Brent Council via various funding streams and where all staff are Brent employees, provides additionally resourced provision for children with autism as well as places for children with significant special needs deemed Outstanding by Ofsted. All these placements are made through a borough-level panel.

A glaring problem is that nowhere in the consultation LINK is the Nursery School explicitly mentioned so parents and others making a submission will have to find a way of shoehorning comments in. The process is already complicated enough, without parents, who are often speakers of English as an Additional Language, having this as a hurdle: 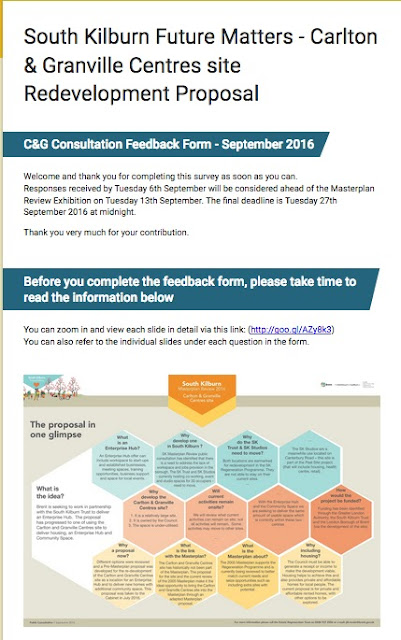 The process started when the Brent Cabinet in late July (after schools finished) signed off a scheme to demolish the Carlton and Granville Centres and bring the site into the SK Masterplan as an enterprise hub and community space, plus housing.


Who is affected by the proposal?

The proposal is relevant to residents in South Kilburn, small businesses in the area and the South Kilburn Trust.  As the premises proposed for re- development are largely unoccupied and will shortly be vacated by the remaining users, there is no impact for existing users

The new build purpose built nursery space (half the school) occupies  the premises and are not vacating it. Clearly there is a major impact.

In the main body of the report, section 7 states:

7.1 There are no new staffing or accommodation implications for Brent staff. However there will be a need to consider the relocation of the Children’s Nursery and Barnardo’s Children Centre as part of the phased redevelopment of the Carlton and Granville Centres.

The Nursery School workers are Brent employees so 'no implications' is clearly  wrong and 'considering re-location' is more than a little vague.

The tentative possible inclusion of the Nursery School in rebuild and expansion plans following the merger of Carlton Vale Infant and Kilburn Park Junior (Foundation) school appear to be dead in the water as they both appear to be against a merger.

With no Council notice to parents and staff  or discussion with them before the July Cabinet decision this gives the impression of yet another 'done deal' and constitutes another unnecessary failure in communication leading to distrust in the Council.  It has echoes of the situation that occurred with Stonebridge Adventure Playground.

In fact there is a 'presumption  against closure' of Maintained Nursery Schools and it would be difficult for Brent Council to fulfil the clear criteria that have to be met in the Granville Plus Nursery School's case.

If the Council is to avoid another clash with residents it should at least set about improving communication, starting with reviewing and revising the consultation proposals, giving clear and specific assurances on the future of the school, and extending the consultation deadline.
Posted by Martin Francis at 16:44:00

Isn't this so typical of Brent Council. ?? Corrupt ?? Downright COMPLETELY bloody incompetent. WHICH EVER IT IS IT IS NOT GOOD ENOUGH. If they cannot do better they must go.We should not be expected to take this nonsense.