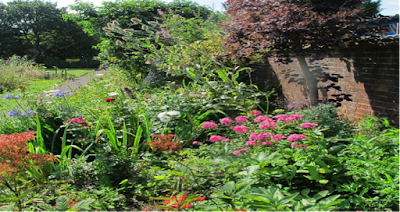 There will be an  Open Day at Roe Green Walled Garden in Kingsbury on Saturday September 10th from 10.30am until 4pm. This is another Brent resource, passionately supported by volunteers of the Barn Hill Conservation Group, that deserves to be better known. To whet your appetite here is some background from the Group:
Roe Green Walled Garden
The little known oasis is located within Roe Green Park, Kingsbury next to Kingsbury Manor House.

In order to locate the garden start opposite the junction of Kingsbury Road with Valley Drive and follow the road into Roe Green Park, bear left at the fork and continue to the Walled Garden. Buses 183 and 204 stop by the junction; and Kingsbury tube station is nearby.

History
The garden was originally part of the estate of the house now called Kingsbury Manor. The house was built in 1899 for the Duchess of Sutherland and her third husband Sir Albert Kaye Rollit, who was M.P. for Islington from 1886 to 1906. It was then a country house, surrounded by farmland, and was called 'The Cottage'. HERE