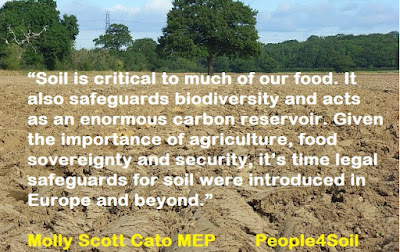 I am just back from a few days away in Cambridge and the surrounding countryside so this press release from Green MEP Molly Scott Cato has come at a time when I am reflecting on what I saw.  It is not just the concreting over of vast tracts of land on the outskirts of Cambridge but also the intensive and vast mono-culture that is evident.


Molly Scott Cato,, who sits on the European Parliament’s Agricultural Committee, has echoed calls for radical reforms to agriculture as the UK prepares to leave the EU.  A campaign for reform is being launched by campaign group Greenpeace who have called for an end to the single payment scheme, arguing it disproportionately benefits large landowners and fails to deliver enough public benefit.
Greens have long championed reforms to the Common Agriculture Policy (CAP) calling for a farming support policy which improves soil fertility, protects and encourages biodiversity, safeguards animal welfare, reduces the use of pesticides and fertilizers and promotes crop rotation. They have also called for a ceiling for farm payments of €100,000 a year, allowing more money to go towards supporting a shift to smaller scale sustainable farming and creating long-term employment in rural economies. However, Molly also believes the government have stood in the way of implementing green measures under CAP. She said:

We need to ensure that farm payments are not directed towards wealthy landowners, a choice that was made by the UK government rather than the EU during the CAP era. The government had an opportunity to cap payments over a certain threshold and allow payments to smaller farmers with under 5 hectares. They chose not to. Likewise, with part of farmers’ payments under CAP already dependent on implementing greening measures, DEFRA chose a restrictive approach, failing to give farmers many options in implementing such measures.

I have long argued to cap the CAP and for CAP payments to be based on the achievement of environmental benefits but it is often conservative governments, supported by their land-owning baron chums, who have blocked reforms.

Molly and her Green colleagues Jean Lambert MEP and Keith Taylor MEP recently made a written submission to the Commons inquiry on The Future of the Natural Environment, expressing their concerns about the future of farming support following the UK’s withdrawal from the EU. Molly said:


The government has failed to outline its vision for British farming following the vote to withdraw from the EU but shows worrying signs it will try and take us down a route to intensify our farming industry. There is also the risk of losing the environmental protections pioneered in the EU, such as the Birds and Habitats directive. We must also acknowledge the huge and important part farming can play in averting climate chaos by capturing carbon.

So, this is a critical time for small scale farmers, environmental campaigners and progressive politicians to seize the moment and help shape a healthy, economically sustainable and environmentally-friendly agriculture sector for the future.

Molly is also supporting a new European Citizens’ Initiative, People4Soil which aims to get over a million people to sign a petition to put pressure on EU institutions to adopt specific legislation on soil protection. Writing for the New Scientist on the new initiative, Molly said:


Soil is critical to much of our food. It also safeguards biodiversity, as a habitat for below-ground life as well as helping mitigate and adapt to the effects of climate change. Given the importance of agriculture, food sovereignty and security to the EU, it’s time legal safeguards for soil were introduced in Europe and beyond.