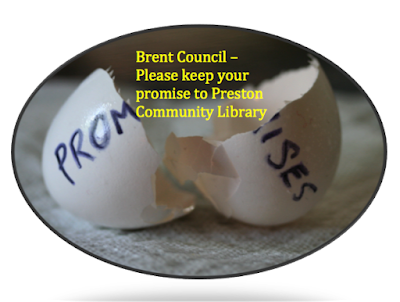 This letter has been sent to Brent Cabinet members prior to tonight's meeting.

Re: Preston Community Library
Report for consideration at Cabinet meeting on Tuesday 13th September 2016
I write as chair of Brent SOS Libraries, an umbrella group supporting library campaigns and community libraries across Brent. The contents of this email have been approved by the four community library groups at Kensal Rise, Cricklewood, Barham and Preston. I have been made aware of the report relating to redevelopment of the Preston Library site, which I understand you are due to consider at the cabinet meeting tomorrow, Tuesday 13th September 2016.
It is well known that a clear pre-election promise was made at a public meeting on 7th May 2014, when the Brent Labour Party promised to “offer the building at a peppercorn rent to any local community group who can provide a sustainable community library... that is our pledge. We will not open to competitive tender in order to give preference to local groups.” You were present at that meeting and supported that pledge.
Since then, volunteers in Preston have worked extremely hard to set up and sustain a community library in the building. Despite the constraints placed on them by sharing the library building with local schools using it for overflow classrooms, library volunteers in Preston have developed an amazing local resource, which is providing valuable services to the community. As you probably know, Preston Community Library is a registered charity. In addition to providing books, study space, and computers with internet access (vital for people who have no or limited computer or internet access at home), they also run, among other things, ESOL classes, a film club, and writing projects for children and young people.
Representatives from Preston Community Library meet regularly with those from the other community libraries setting up across Brent (Barham, Kensal Rise and Cricklewood), as part of the umbrella group Brent SOS Libraries. In recognition of the importance of our work, we have recently received a grant of £45,000 over two years from the Council’s Voluntary Sector Initiative Fund for support and development of services across the four libraries. We were one of eleven bids from a total of 43 applications to be successful.
The four community libraries have also started to work with the Brent Library Service and we have met with them on several occasions this year. In July we were very pleased to participate in the Culture Open Day at Willesden Green Library, an event which we planned jointly with the Library Service. We look forward to working more closely with the Library Service in the future.
In the circumstances, I was most surprised to read the report prepared for the Cabinet, which makes no reference to the pre-election promise. The proposals contained in the report breach that promise by proposing open market tender and a significant annual rent for community space. A community library is not going to be able to pay the sorts of sums proposed. Libraries are not designed to be profit making, they are providing a free service to the community. This is understood at Kensal Rise and Cricklewood, where the libraries will only pay a peppercorn rent. The hard work and goodwill of the many volunteers supporting Preston Community Library, and the benefit that it provides, should not be disregarded in this way.
Any proposal for future use of the Preston Library site should honour your pre-election promise and should recognise the value, including the social value, of the work done by Preston Community Library. PCL should not be subjected to an open market tender process and should not be required to pay more than a peppercorn rent. If the site is to be redeveloped in some form, PCL should be provided with space in the new development on the same basis, and you should provide them with alternative accommodation whilst the site is being redeveloped.
I look forward to hearing from you.
Yours sincerely,

I am aware that at least some members of Brent's Cabinet already support the views set out in this letter to them from the Chair of Brent SOS Libraries. I do not know where some of the other Cabinet members stand, including the Leader and Deputy Leader.

I will not be at the meeting this evening, but I hope that someone who is will provide Wembley Matters readers with a detailed account of the discussions on this item, and how each Cabinet member votes on any resolution about it. Thanks!