So what happens to the rest if all Brent secondary schools select the most 'academically able'? 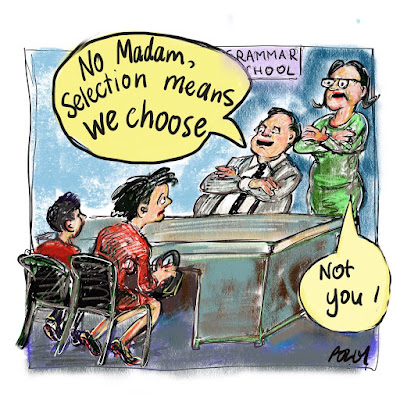 Theresa May wants all secondary schools to be able to select. Here in Brent with no local authority secondary schools, that could mean multi-academy chains, stand alone academies and free schools fighting to select the most 'academically able' leaving those deemed 'not academic' along with special needs children and those in the first stages of learning English where exactly?

The NUT has been quick off the mark with this EduFacts special on Grammar Schools:

As always Michael Rosen is well worth reading on the subject HERE and the Local Schools Network has published a well argued piece by Janet Downs HERE.

My Green Left colleague Mike Shaughnessy has written about the issue on the London Green Left blog LINK,

All of this furore over Grammar Schools from people often not educated in comprehensives (& mostly private school or grammar schools) is based on a rosetinted view of the comprehensive ideology. It is noteworthy that these anti-grammar politicians are the same ones who do all they can not to send their children to the local comp. (what was Barry Gardiners excuse again...) The reality is that leading comprehensives are disproportionately in affluent areas and selection already occurs by the wealth of the parents. A recent study found that parents pay on average 53K extra to live in favoured catchment zones. Yes there are undoubtedly 'good' schools but there is a bell curve which means people often in the most deprived areas are stuck with the poor ones. That a concern is held other schools will 'get worse' is irrelevant because as detailed above in places like Brent, schools run autonomous of local authority control. Perhaps schools getting 'worse' is just a reflection of how much better Grammar Schools may do. Meanwhile, over in Barnet, Grammar Schools and Comprehensive schools co-exist, each are said to be doing great & the world hasnt caved in.

The Green Party is against free schools, academys and Grammars & may have lovely education policies but the power to implement it is not forcoming. In the here & now children who can't afford the private sector deserve other options. If The Green Party seeks to allign itself with Labour & of the old sort, it might like to consider why for half of Labours existance (when it really was a workers party) Grammars were party policy. It is noteworthy that the majority of people from the most deprived areas support Grammars yet the majority of Labour & The Green Party are made up of people from more affluent backgrounds who are against.

I agree with Paul Embery, secretary of the Fire Brigades Union:
"The Left needs to decide whether it prefers selection by wealth and sharpness of elbow over selection by ability. It's as simple as that."

Scott, I went to a secondary modern school which I left shortly before my 16th birthday. Grammar school places were severely restricted where I lived (they were not uniformly distributed across the country). I had to catch up on my education through night classes, TUC courses and self-study.

Despite personal background this I want to construct a case on the evidence rather than individual experience.

The evidence, for example, of the very low percentage of children in grammar schools who are entitled to free school meals is telling.

Some of the sources cited above recognise the issues around selection by house purchase. There is also selection by the parents'ability to pay for tutoring to pass the 11+ or its equivalent. Those with the ability to pay to get ahead will always find a way around the system.

Schooling 'getting worse' is not the situation in Brent where standards are higher than in many fairly affluent rural areas. The improvement has not been the result of selection (although there are concerns about hidden selection) but of systematic improvement owing more to the London Challenge strategy than government policy.

Because secondary schools in Brent are academies or free schools (some governed by an academy chain), they will make their own decisions about selection. The history in Brent is that competition between the secondary schools has resulted in changes such as seeking academy status, starting a primary school on site (not very successfully)etc and I expect selection to be an arena of competition between the schools. The question remains about what happens to those not selected.

Academies are already reluctant to take SEN children in many cases and there appears to be some 'post-admission' selection where children are moved on during Year 7 when they don't 'fit' into the school ethos. Selection at 11 makes no provision for differing rates of development (children for whom things clicked later in life were known as 'late developers'. 11+ plus pass scores were different for boys and girls - as otherwise grammars would have had a disproportionate number of girls who were ahead of boys at 11.

EAL children still learning English at a deeper level, although superficially fluent, would also be disadvantaged in some selection methods.

Another consideration is the impact on primary schools. With the curriculum already narrowed by Key Stage 2 SATS and the widely reported stress this means for both teachers and children a further pressure (training to pass selection tests) could be disastrous. Reducing Year 6 to training for tests. Imagine the situation if all the secondary schools selected by a different method - IQ test, Verbal Reasoning, non Verbal Reasoning etc.


The impact of 11+ failure on children's self-confidence in future life is a key issue. Schools are finding this is beginning to be an issue with the Key stage 2 SATs.