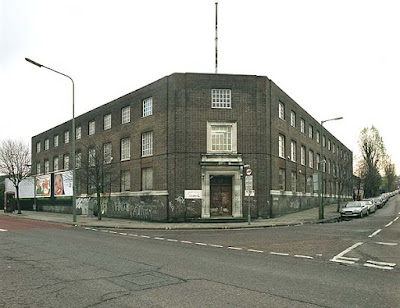 The 'Pre-Application Presentations' now made at Brent Planning Committee are useful as an early warning of planning applications to come. The public are not allowed to make representations but can watch the presentation.

At the November 16th Committee there is a presentation on plans for 403-405 Edgware Road/corner of Oxgate Lane that includes a 23 storey building. The present building has a fascinating history. It was completed on the site of an existing admiralty building, known as the Admiralty Chart House in 1940 and housed navy and civilian staff in case Whitehall became unusable because of bomb damage. Since then it has had multiple uses uncluding a carpet warehouse LINK:

Firstly, there’s obviously the fact that the site is of major historical interest. We’d most certainly push for Listing if there were any attempt made at demolition. The current owners illegally removed the Crittall windows and were served a notice to replace them, too. Other modifications have also been made by them and the building has been deliberately neglected.

The idea of a conference centre to serve over two thousand people is, frankly, insane. The local transport system simply can’t support it and our roads cannot take the volume of parked cars. The owners of the building have already caused massive disruption at times by using the building for festivals and exhibitions. The knock on impact of their inconsiderate parking has been felt within a mile or more radius here in Dollis Hill.

A further point on the conference centre is that it is highly unlikely to be used by local residents, given the salary levels and deprivation levels in Dollis Hill. The functions which the applicant has already held in the building have been attended by people who were most certainly not local. Having talked to several, they came from as far away as Reigate and Brighton!

As you rightly state in the report, it will also cause massive pressure on the businesses who park locally.

I don’t know if you’re also aware that Highways have already stated that a CPZ will be needed across Dollis Hill once the Brent Cross scheme gets going: the funding for that is apparently coming from Barnet’s S106/CIL monies.

In terms of transport, whilst there may possibly be a new Brent Cross Overground station one day, access to it from Brent is very limited for pedestrians, so I’m not convinced it will improve the PTAL rating overmuch. The applicants claim of 30 buses every hour on that stretch of the A5 is, frankly, nonsense.

Additionally, the idea of a 27 storey tower block is unbelievable. It’s totally out of context, intrusive and represents a development that is massively out of place in what’s still a mostly residential area. I note you’ve stated that the surrounding buildings are three of four storey, but the  1920s and 30s two storey housing is not far away. Given the topography of the area, it will be very obvious – just as the 27 storey block in Barnet on the Welsh Harp is LINK.

In terms of traffic, I have VERY grave concerns indeed about the impact on Dollis Hill. It is not currently possible  to turn right into Oxgate Lane (or Humber Road) from the southbound A5, and the only access to the site, whether from the A5 or Oxgate Lane is from the northbound Edgware Road. Barnet’s Brent Cross Regeneration plans call for a new road junction at Humber Road, allowing a right turn from the southbound A5, but this is being opposed strongly, and so may not happen. But in any event, as matters stand anyone approaching the development from the southbound A5 would need to rat run through Dollis Hill, by using Oxgate Gardens or Dollis Hill Lane, then Coles Green Road for access. We already face tens of thousands of extra cars each day from the Brent Cross plans, so this would be a major issue.

The detailed pre-planning report can be found HERE.
Posted by Martin Francis at 17:50:00