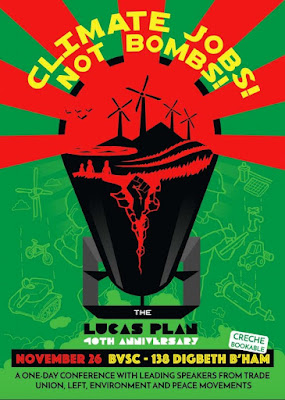 Leading figures from the left, trade union, environmental and peace movements are coming together at a conference on November 26th with a fresh perspective on tackling current crises, using the ideas of socially useful production pioneered in the Lucas Plan. The Plan, produced by workers at the Lucas Aerospace arms company, showed how jobs could be saved by converting to make socially useful products, rather than weapons. See www.lucasplan.org.uk, or the notes below for more information on the Lucas Plan.

The conference will focus on 5 key themes:

The Lucas Plan and socially useful production.
Arms conversion and peace.
Climate change and a socially just transition to sustainability.
The threat to skills and livelihoods from automation.
Local/community economic and industrial planning.
Linking all these issues is the need to rethink how we can produce what people and society actually need and overcome corporate domination through their control of technology.

Highlights of the conference will include:

Screening of a new film on the Lucas Plan by Steve Sprung.

The conference on the Lucas Plan 40th anniversary will be held at Birmingham Voluntary Service Council (138 Digbeth, Birmingham, B5 6DR) on November 26, 2016.

Tickets are £10/£5 concessions: To book for the conference, visit www.lucasplan.org.uk/tickets. For more information, email info@breakingtheframe.org.uk

BACKGROUND INFO: The Lucas Aerospace Shop Stewards Combine’s Alternative Corporate Plan (‘The Lucas Plan’) was launched in 1976 and became famous worldwide, sparking an international movement for socially useful production and workers’ plans. Facing the threat of redundancies, the Combine collected 150 ideas from shop floor workers about alternative socially useful products that could be produced by the company, instead of relying on military orders. Many of the innovations in the plan, such as hybrid car engines, heat pumps and wind turbines were commercially viable and are now in widespread use. Although the Alternative Plan was rejected by Lucas Aerospace managers, it was instrumental in protecting jobs at Lucas in the 1970s. The Combine was nominated for the Nobel Peace Prize in 1979 and Mike Cooley received the Right Livelihood Award in 1982. More information about the Plan, including the 53-page summary of the five 200 page volumes, can be found on the conference website, www.lucasplan.org.uk.

Getting to the Conference

The conference venue, Birmingham Voluntary Service Council at 138 Digbeth B5 6DR, is very close to central Birmingham stations, click here for map. We'll be starting at 10am sharp and we have a packed programme, so please be on time.