Another blow to Brent and Kilburn Times 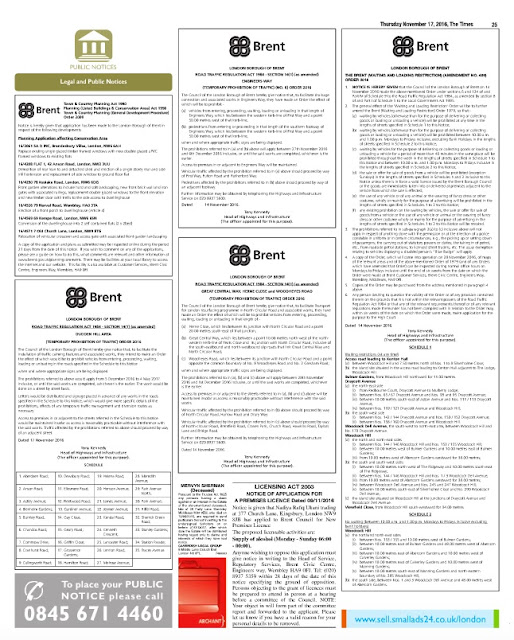 I wrote previously LINK about the decision of Archant, owners of the Brent and Kilburn Times, to make redundacies through doing away with News Editor posts on its papers, instead merging web and paper roles and centralising news gathering.

I now understand that the three sports writers on the newspaper are to be made redundant and a new post created which will essentially mean one person doing the job of three.  As the sports page, reporting on local fixtures, are probably one of the more popular features of the paper, this seems rather short-sighted.

It saddens me as someone who values the contribution of local newspapers to democratic accountability and building a sense of local community to see their gradual demise.

With few staff they are likely to rely on lightly edited press releases and shared copy rather than original stories.

At present local newspapers are helped to keep afloat by local government advertising in the form of statutory notices (see above). This ensures a steady income independent of the ups and downs of the local economy. However there have been reports that the government is thinking of removing the requirement for such advertising, allowing councils to put the information on-line only.  Given councils' budget constraints they are likely to go along with the proposal and withdraw such local newspaper advertising, dealing another, possibly fatal, blow to the local press.
Posted by Martin Francis at 08:37:00

In LB Camden, I recall, under 2006-2010 Conservative-Lib Dem coalition, the Council threatened Camden New Journal that if the paper did not soften its critical line toward the coalition, the coalition would stop using the CNJ as a mouthpiece for statutory notices.

Now, under a Labour administration, Camden Council has been criticised for spending £60K Council Tax payers' money on cyberspace presence. Published two weeks ago, a CNJ story is now #4 of its most read stories: Council's 'eye-watering' £60k bill to revamp spin-off entertainments website.