Cllr Butt admits wrong doing in the 'tarmucking' of local street. What now? 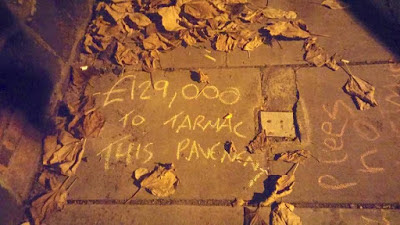 Nine Chandos Road (or nearby) residents attended the Brent Connects-Willesden meeting at the Willesden Green Library last night and five of them spoke against the council's policy to replace paving stones on walkways with tarmac.

Points made included:
Cllr Long was personally addressed and admonished by a resident who said she had been particularly adversarial to the community in her emails making her view clear that urban landscaping is unimportant given the crisis in social care and the election of Trump. Reflecting on Cllr Long's attitude a resident called for the council to work with them not against them.

A resident brought up the Willesden Green Library debacle and the residue monies collected from that project and asked why those monies couldn't be given back now in the form of paving repairs as a goodwill gesture for the the asset stripping that occurred then.

Mohammed Butt met with the group after the meeting for about 10 minutes and according to residents accepted that the council had indeed gone about this very badly and apologised.


He appeared to accept the point that we were angry, that this was a waste of money and that it could be better used elsewhere. When pressed about halting the decimation of our street, he spoke of legal obligations though this was vague I think he meant people tripping and couldn't provide any evidence on figures for people claiming for tripping in Chandos Road. He then said it was more or less impossible to interrupt the process that was taking place as he would be seen to renege on the council's own decisions - I put it to him he could interrupt and someone (probably him) has the power to put a stop to it and send the contractors to another site. He wouldn't give any concrete assurances. When he left I think the general consensus was he took our points on board and whilst it may not stop the ruination of our street it may stop them bulldozing over the needs of other residents' streets.

The residents Facebook RAT-Resistance Against Tarmac is HERE
Posted by Martin Francis at 15:32:00

Can someone please tell me what the election of Trump has to do with the wasting of Brent's taxpayers' money on unneeded pavement work in Brent.....Don't tell me Brent Council has now sold the whole of Brent to the Americans as a job lot after flogging off all the land around the stadium to them.

Perhaps Brent Labour are a metaphor for the ignorance of Trump.

I don't know why Brent residents forget the fact that Cllr Butt is 'working hard for himself' till May 2018. After that May 2018 council elections RIP as council leader.

He does take on board what the residents say!!wherher he does anything is a different matter! I think he's the most approachable leader we've had in years.

We have been told there is no money for more waste enforcement against flytipping. Now why is there such a huge Labour majority in the council? They have all been elected back in despite Labour having lead the council like this for years before the last election. If nobody votes any opposition into the council, any complaints don't come with a lot of authority, sadly.