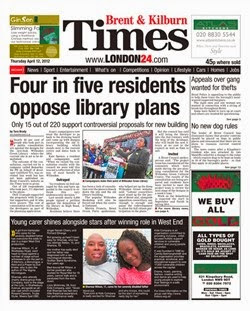 Norwich based Archant, publishers of the Brent and Kilburn Times, and many other local papers, has announced a new 'audience led' strategy which will see News Editors replaced by 'content editors; who will oversee a system in which digital content will feed straight into the printed paper.

Redundancy notices were being issued today by email and are likely to include Lorraine King, veteran news editor of the Brent and Kilburn Times.   King's strength has been the fact that she is firmly part of the local community and has been unafraid to campaign on issues such as retention of local libraries, saving Stonebridge Adventure Playground and the future of Central Middlesex Hospital.

Importantly King has not given in to pressure from Brent Council's political leadership to adopt a more friendly approach to the Council. LINK

Staff will be only offered statutory redundancy pay.

There was a wave of redundancies in 2011-12 at Archant which eventually left the Kilburn Times with the equivalent of 1-1/2 reporters, now the combined role will be equivalent to one person running the newspaper AND website.

Readers will have noticed how the number of pages of the BKT has shrunk in the past few years which means that many stories that are published on the web do not make it into the print edition. This can be frustrating for local people who want to see their cause given publicity.

Archant seems determined that they will not suffer the fate of the Wembley/Harrow Observer which switched to 'digital only' and in the guise of Get West London LINK has all but disappeared.

Our strategy to be more relevant than ever before is not dependent on platform.

Our strategy begins and ends with our audience. That’s why we describe our approach, quite simply, as audience-first.

Editing the newspaper will be done with a very light touch from title editors – I do not want editors spending hours deciding between the page 9 and page 15 leads, or coping with the perennial last minute need for dozens of fillers to complete news pages.”


I think the results are stunning, and that both you and – even more importantly – our readers will love them.

Senior reporters and specialists will be encouraged to publish direct to digital and – liberated from the domineering task of filling the newspaper – I expect to see us create even more content than we do today.

To facilitate the easy production of the newspaper, we will create content in pre-ordained styles that will both look great online and in print. But the practice of holding content back for print will end, with very few exceptions.

In a nutshell, I am asking us to stop editing a newspaper, and instead edit the community we serve.

This sounds remarkably like a print edition of the web-pages and with the accompanying centralisation perhaps less sensitive to local issues.

A spokesperson for the NUJ told me this afternoon that they were still in meetings about the changes but stated that they were very concerned about the impact on the quality of journalism and the service local newspapers give their readers.  In particular they had had nothing from Archant on how the remaining staff would cope with the new workload and were concerned about their members' well-being.

I hope the NUJ, as they did in 2011, will put up a fight for their journalists, but meanwhile I salute Lorraine King and her other news editor colleagues for the job they have done in maintaining a robust scrutiny of local democracy and publicising and often backing local campaigns.

Our democracy cannot afford to lose this essential service, unfortunately with one person being left to cover the whole borough and the inevitable impact on the quality of the newspaper, I can see the eventual demise of the Brent and Kilburn Times.
Posted by Martin Francis at 14:43:00

I remember some years ago discovering that the Sidmouth Herald was part of the same -- largely property ad focused -- news group that owned the Ham&High (Hampstead & Highgate Express). That company is now Archant.

I also applaud the excellent work done by Lorraine King and her colleagues in supporting local causes. If she, and the Brent & Kilburn Times, are "lost" because of the latest Archant proposals, then our borough will be the poorer for it.

The front page that Martin has used as an illustration is a good example of the support which the newspaper has given to the local community. Through its front page reporting, and readers letters published about the issue, the B&K Times was a great help to local people in winning the fight with Brent and its developer partner to save the Victorian library building at the front of the new Willesden Green library.

The original library there dates from 1894, but the predecessors of the B&K Times, the Kilburn Times and the Willesden Chronicle, go back even further, to the 1870's. If you are interested in what everyday life was like in Willesden at any time since then, you can arrange to view microfilms of these newspapers for any of the past 130 years at Brent Archives, on the second floor of Willesden Green Library - see: www.brent.gov.uk/archives.