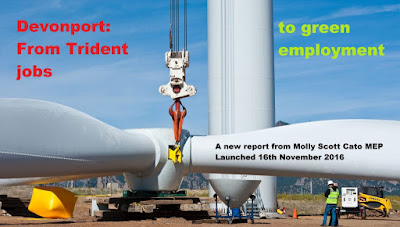 Green MEP for the South West, Molly Scott Cato, is to launch a new report tomorrow looking at how jobs linked to Trident can be converted into green jobs

The report explores how the current 2000 or so Trident-related jobs in Plymouth could be replaced within the emerging local ‘green’ economy, while making use of existing local skills and facilities.

Speaking ahead of the launch Dr Scott Cato said:


Some people, including some Trade Unions, argue that the UK’s Trident nuclear weapons system helps sustain thousands of high-quality jobs in the UK, including in Plymouth in my South West constituency. But this report blows that argument clean out of the water. For far less public money, we
could invest in socially productive employment to replace Trident-related jobs.

We can abandon Trident replacement while maintaining employment but start transferring investment and skills into socially useful and sustainable jobs, making use of all the fantastic skills and resources available at Devonport.

Trident is militarily useless, immoral, and is a breach of our obligations under the Nuclear Non-Proliferation Treaty. Creating new green jobs can be viewed as an act of peace; nuclear defence is an industry of war.

The full report will be published on November 16th.