Has Sam Stopp been shot down over Heathrow?

Cllr Sam Stopp announced a week or so ago that he was seeking the Labour nomination for Richmond on a pro-Heathrow, pro-growth, pro-jobs ticket.

More recently he announced that he had been long-listed for the nomination.  Today his Labour councillor colleague Cllr Neil Nerva posted the above tweet on Facebook.  It says:

I can't see that tweet on Stopp's timeline now LINK  but that is not surprising. Stopp has deleted nearly all of his tweets many of which backed Owen Smith in the Labour leadership election and criticised Jeremy Corbyn.  One tweet stated he was ashamed that Brent Central CLP had backed Corbyn and another accused Labour colleagues of refusing to allow him into a meeting about the Labour leadership.

All rather strange.  It is not clear whether this marks the end of his Richmond Park bid or whether he is still in the race.

For the record this is what Stopp said previously about the Richmond Park by-election: 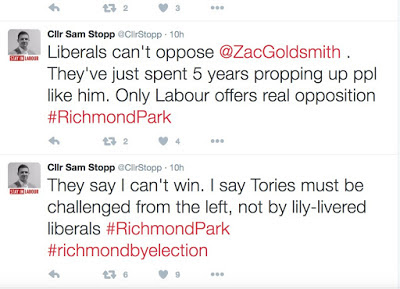 Any Labour voter with a brain cell will vote Lib Dem in the chance of reducing May's majority a tad. Though none of it really matters if Trump gets in as we'll all be dead by Christmas.

Stopp deserves credit for backing up his chutzpah by putting himself forward. Wolmar would be an excellent choice

Excellent choice if splitting the anti-Brexit and anti-Tory vote is your intention.

Green candidate has pulled out and endorsed the Lib Dem as the best anti-Tory, anti-Brexit policy. Does Labour have the sense and the courage to do the same?

Sam Stopp is fit though

Sam Stopp, Chair of the Labour Campaign to end Homelessness is "an expert at getting MPs to speak at his events about the importance of truly affordable council housing - but taking no part in the discussion/process within your own council on the decision about the future of BHP which will have an irreversible impact of the provision of council housing and stock". That quote is from another Labour Councillor in Brent.

On the matter of deletions, I have just done a little search of my Webmail Inbox for items on a certain e-list and discovered something like 800 such items. Those were on a non-public platform and so in the interests of saving the earth's resources, I deleted them all.

Of course the discrepancy between the number of 'likes' and total content of Cllr Stopp's Twitter account is a different matter though. Maybe he should try to be headhunted by UK Government or think tank ReformUK if he has not already been 'long listed' by them?

Sam Stopp will be an MP and government minister one day, he is ruggedly handsome, terrifies the Trots. He will not Stopp until all the blood and tears are sweated. The country will bow down to him. Long Live Sam Stopp!

Lol! As if Butt ever holds meaningful discussions about anything with his councillors. Sounds like someone is jealous. Stopp certainly has an ego but at least he's trying rather than just sitting around whinging