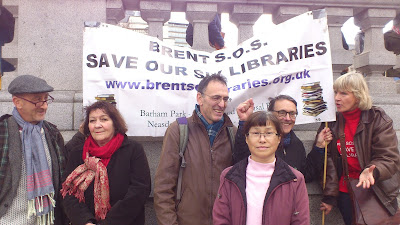 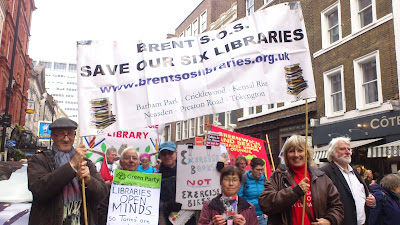 March for libraries, museums and galleries from Ian Clark on Vimeo.


Brent Library campaigners were among 2000-3000 people who joined yesterday's march in protest against 'culture cuts' to libraries, museums and galleries. Some cuts come as funding cuts or closures others through the backdoor as out-sourcing and privatisation.

Brent Council closed six of its twelve libraries in the first round of local government austerity cuts. Of the six here are now volunteer libraries at Barham, Preston and Kensal Rise and Cricklewood is on its way.

Neasden Library is particularly missed serving a poor area with many children, as is Tokyngton in Cllr Butt's ward.

In her speech Sian Berry, Green Party Assembly member,  praised library volunteers (she is one too) who had fought to keep library facilities open. She acknowledged it was hard work and would be unnecessary if we had a properly resourced, professionally staffed, comprehensive system.

The rally was addressed by Barnet library staff who were on strike on Saturday. The crowd were warned that cuts and closures, if they had not already arrived, were 'coming to a library near you'.