Brent NHS Clinical Commissioning Group  is proposing to close the Central Middlesex Hospital Urgent Care Centre, presently available 24/7, from midnight to 8am, saving £450,000 annually in what they admit are financially challenging circumstances.

The service is currently provided by Greenbrooks and the CCG says the provider agrees with the proposal. The CCG health, rather than financial case, is based on low usage and availability of alternative provision:


The data analysis based on “reasons for attendance” showed that from the average of ten (10) patients attending per night, the following would be the appropriate course of action if CMH UCC were to close overnight:
o Less than 1 per night would continue to require ED either urgent treatment or referral to specialty review
o One(1)per night would need to attend an alternative UCC such as Charing Cross, St Mary’s, Ealing or Northwick Park
o Four (4) per night could access an alternative night service such as GP out of hours
o Four (4) per night could access alternative provision, including their own GP, the next day

The UCC was set up in 2014 when the Accident and Emergency service was closed at  Central Middlesex Hospital, despite widespread opposition, which included rather belated opposition from Brent Council.  The overnight closure of the UCC represents a further deterioration of the service currently offered to residents in Harlesden, Park Royal and Stonebridge.

Transport difficulties to alternative A&Es was always a factor in the original campaign against the A&E closure was a major factor so the CCG puts forward the transport timings for residents seeking overnight treatment: 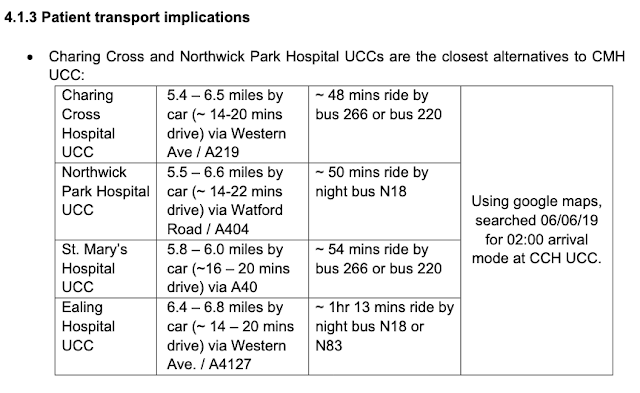 The CCG argue that the change would mean a 'safer urgent and emergency offer by reducing entry points to out of hours services':


The alternative offering being implemented by the CCG will aim to drive down [] inappropriate attendances, helping to provide choice and direction to those seeking advice and care. The majority of attendees overnight are between 20 and 44, the age group most likely to have internet access at home, or own a smartphone, and therefore be best place to benefit from digital signposting.

People arriving out of hours at Central Middlesex will be advised to dial 111.
The report will be considered by Scrutiny Committee at its meeting on July 9th. The full document is HERE