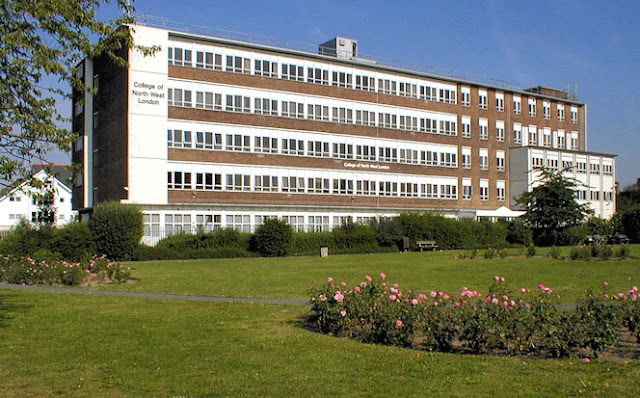 The College of North West London, now part of United Colleges after its merger with Westminster College, is getting involved in another property deal after selling off its Kilburn site some time ago LINK and one of its Wembley Park buildings to the Education Funding Agency for Michaela Free School.

The latest move is to sell the Willesden campus on Dudden Hill for housing development, vacate the remaining Wembley Park building for redevelopment, and move everything to what is currently the Network Housing building on Olympic Way.

Colleges are not now part of the local authority but have Corporation status.

The present Wembley Park building, together with the shopping precinct, McDonald's and the ex-TV studio, temporarily the Troubadour Theatre, together make a prime development site close to Wembley Park station.

Brent Council is proposing that it provide United Colleges with a bridging loan facility of £50million to  facilitate the process as UC have been unable to get a loan from other sources due to the period involved.

A report to the Cabinet LINK sets out the rather complex deals involved:

In order to consider the loan transaction being proposed this report now sets out the essential features of the overall transaction. In summary:
•       United Colleges would swap the former CNWL site at Wembley with Quintain for the site currently occupied by Network Homes. This latter site would in turn be redeveloped to provide the long-term, and substantially enhanced educational facilities for United Colleges, and the former CNWL site for housing, in line with the existing masterplan for Wembley Park.
•       The current Willesden site would be developed to provide new housing, including affordable housing. This would happen in stages, so that there would be continuity of educational provision during the development.
•       United Colleges would use the proceeds from the sale of their Willesden site to fund the development of what is currently the Network Homes site. Since this will, be before the whole of Willesden is sold, United Colleges need the bridging finance set out in this report.
•       On agreement of the terms between United Colleges and Quintain the development would commence, with the approximate expectation that the permanent facilities in Wembley Park (the current Network Homes site) would open in July 2023 and the two stages of the Willesden site would complete in July 2020 and July 2023. The former CNWL site in Wembley Park would be developed by Quintain by after it is vacated by United Colleges in July 2023.
•       In order for United Colleges to be able to sign their contracts ‘and any other agreements with Quintain they would need to be sure that they had access to a loan facility to enable them to fulfil their construction contract (i.e. to develop the college facilities at Wembley Park). They therefore require reasonable certainty from a lender that these funds will be available. This report proposes that the Council provide such a facility

The report admits that there are risks involved and nothing can be done before thorough due diligence is done and planning permission will be involved, although one can be for forgiven for thinking that such permission is a foregone conclusion.

According to the council the risks are outweighed by the benefits of building 1,500 new homes at Dudden Hill (the report actually says Willesden Green but we can't expect local geography to be planners' strong point) with a further 250 at Wembley Park, the enhancement to the Wembley Park area through a state of the art further education establishment improving the mix of development, an improvement in the actual education offer to local young people and the provision of employment opportunities.

A pertinent question from an ex-CNWL lecturer: 'Is the college's primary role now that of a property developer?'
HERE