It all began in 1999 when the residents of South Kilburn made a bid for NDC (New Deal for Communities) money, which they got in 2001.  Some of the money was used to start building new homes, with Thames Court* being the first one to be developed, followed by a Regeneration Masterplan of the whole estate in 2004.

The residents worked in partnership alongside the Council to draw up the terms of the regeneration, including an offer of one new home to every secure council tenant required to move out of their current home when it was due to be demolished. That is still the case with the publication last Friday (5/7/19) of our landlord's (Brent Council) latest offer that can be found in the papers going to Cabinet on July 15th LINK There will be a Needs Assessment a year before any move to confirm any medical needs, change in circumstance or other preferences: 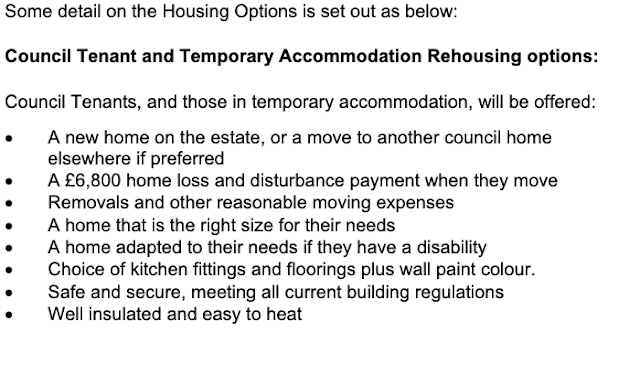 Before any more regeneration can go ahead in South Kilburn, the council has to hold a ballot for the residents of the seventeen remaining tower blocks. There is only one question on the ballot paper:

﻿﻿Are you in favour of the proposal to continue with the regeneration of South Kilburn?
YES / NO

If the council get a majority (50.001%) of yes votes, out of all the total votes cast, then all the blocks will be demolished. The council have not said yet what will happen if they were to lose the ballot. 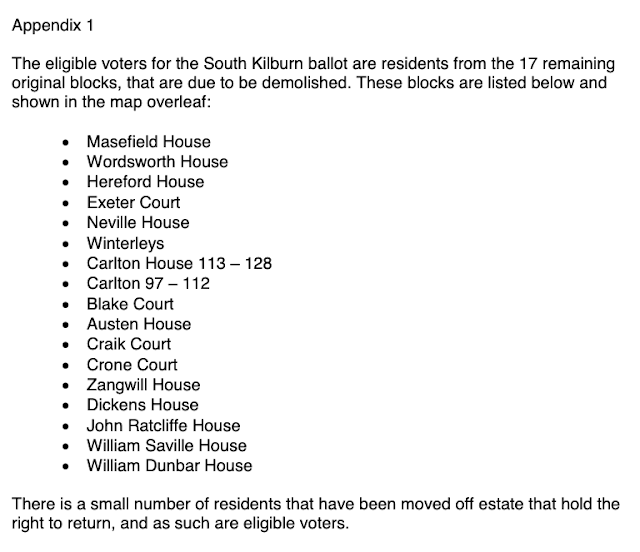 Over 1,000 residents  will be allowed to vote, including secure tenants & leaseholders and one possible contentious group of residents,namely the 235 residents living in temporary accommodation across the South Kilburn estate.  My understanding is that they will need to vote 'Yes' in the hope that the council will eventually give them permanent housing although this may take several years.  However, if they do vote 'yes', this will ensure that the council win the ballot although  it appears the council are confident of winning even without their votes.

* Thames Court was supposed to be the most environmentally built structure in England at that time, 2003.  I cannot remember the actual costs but it came in several millions over budget and the 'green materials' took the blame. The result was that council decided that there were not going to to be any more 'green buildings' in South Kilburn because of the extra costs incurred.
Posted by Martin Francis at 16:42:00