Should Queens Park Farmers Market be able to open on Friday evenings? 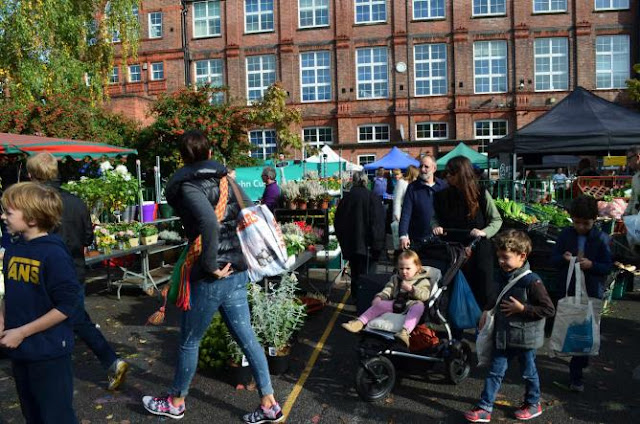 London Farmers Market have put in an application to open the market at Salusbury Primary School on Friday evenings in addition to the present Sunday opening. They claim that Friday opening would raise additional funds for the school, maintain the market's popularity in the face of competition from local supermarkets and appeal to a younger customer base. The Friday market would be half the size of the Sunday market.

This is an extract from their application - full documentation and a link to making comments on the application can be found HERE. There are no comments so far.

The Sunday farmers market in Queens Park is a popular local institution, the level of popularity can be demonstrated by the numbers of letters of support received for the 2015 planning application. It has been trading for 14 years but like any food business needs to evolve and grow with the times. Trading 4 hours per week may not be enough to secure its long term future as in recent years 2 new supermarkets have opened and a third plans to open later this year this is equivalent to 336 extra hours of competition since the market was established and therefore we are looking to trade for an additional 4.5 hours per week

The Friday event will be a smaller test event as we do not plan to operate weekly all year at the moment and it may not be viable for stalls in terms of sales at all, even for just a few weeks. Even if sales are viable it is unlikely that such an event would trade every week of the year it would be subject to weather constraints from January to April. A premises licence application is in process for the event if it becomes weekly and TENS’s have been received for the first 4 weeks. The Queens Park Farmers Market planning application was submitted retrospectively 14 years ago after a 14 week trial under permitted development and a similar approach has been adopted here with the intention initially of only a 4 week trial. However after discussions with planning officers we were advised to submit a planning application before the change of use occurred.

From the feedback we have had to the premises licence application for the event. There would appear to be some main themes identified in the letters of concerns from residents and these largely stem from a comparison with the Sunday Farmers Market. These themes are:

The Sunday Farmers Market has grown into a popular local destination for food shopping over the last 14 years. Since the market opened, Salusbury Road and the surrounding area have changed completely both in terms of its retail offering and late night entertainment. The farmers market is part of the changing face of Queens Park but is not solely responsible for the above concerns raised by local residents and therefore a general increase in commercial activity at weekends has been responsible for making weekends more of a popular destination. In the last few years 2 new supermarkets have opened both trading until 11pm additional bars and restaurants have also opened in Lonsdale Road and Salusbury Road. Numerous big chain coffee shops now dominate the high street. The area is a vibrant place and as an established business of 14 years we wish to expand in a very limited way.

It is understandable that residents would compare this proposed Friday event with the Sunday market but they will be very different events in terms of content, scale and use, which we believe will mean less of an impact on the surrounding area and neighbours. For a start it will be much smaller compared to the Sunday Farmers market. Only 50% of the existing Sunday customer base in a survey said that they would use a Friday evening event and those that would come would not attend every week. Around 15-20 stalls will be present compared to 40 plus on Sundays. It is designed to be a place where local neighbours and families can meet each other after school and work and relax with something quick to eat. The event is planned to be of similar size and scale to a school fete, but if it is to be a regular event Temporary Event Notices alone will not be a suitable way to licence such an activity. We propose that the event could be weekly but it may well be seasonal. The event has two aims:

In the farmers markets 14 year history at the site there have been no reported problems with alcohol sales, no reported complaints about noise and as far as we are aware no complaints of any nature to the Councils licensing or enforcements teams. The market is loved by the community where it takes place. We therefore believe that a smaller event for just 4 hours is even less likely a cause for concern especially when there are other businesses surrounding the site staying open much later than our proposed hours. A brand new COOP opened north of the market site this year, next to residential properties staying open until 11pm. To put this variation into the context of other businesses; we are requesting an extra 4 hours sales per week to add to the 4 hours we have already on Sundays, this is tiny compared to the retail giants of COOP and M+S who opened in recent years, trading 7 days a week 7am – 11pm and now with Planet Organic opening in August a combined 336 hours of extra food and alcohol sales per week, we are requesting a total of 8 hours per week.

To respond to the residents main concerns in turn: 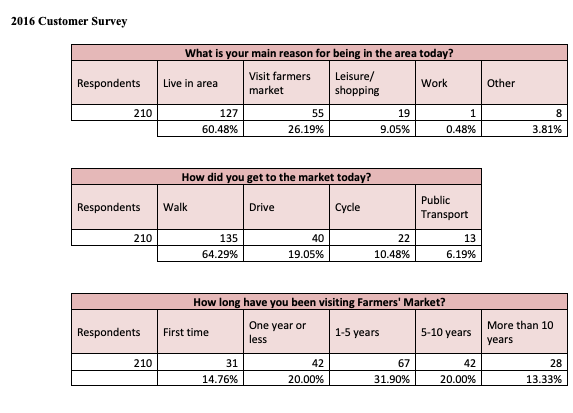 -On Fridays a CPZ is in place until 6.30pm which will deter many drivers. We also expect the customer base to be more local popping in on their walk home from work. Those going out on Friday evenings are also less inclined to drive if they are planning to drink alcohol with a meal.

-There is a general level of background noise in the area due to the busy street and other commercial activity. The southern part of the licenced area where we propose to hold the event is surrounded by school buildings on two sides, Salusbury road on one side and as we will only be using approximately half of the main playground for the event there will be at least 30m between the residential apartments and gym building to the North (See Friday Event Area Below). We expect the event area to be used to be almost 50% smaller than on Sundays. 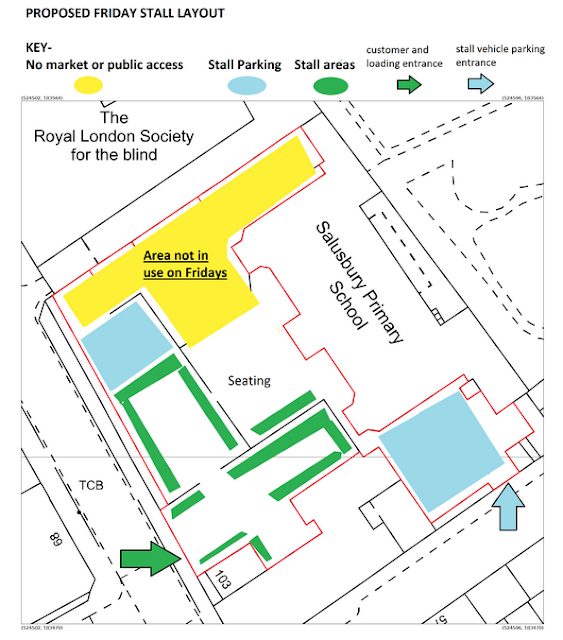 -Given that the event is planned to be 50% smaller compared to Sundays and will have 50% less people on site than during a school day we cannot see noise being an issue. We would be happy to stick to the maximum 499 visitors on site as required by a TEN to protect the amenity of our neighbours

-In order to ensure that we respect the views and concerns of our neighbours we have agreed with the representation from your licensing officers in that last orders should be at 21.30 not 22.00 and the event will close at 22.00pm to the public. The site will be cleared and we believe secured no later than 23.00 which is sometime earlier than the other surrounding businesses.

-This is largely designed to be a food / dining event, alcohol will form a small part of the sales and will be from small independent vineyards and craft breweries who have their own brands and reputations to consider as well as their own personal licences, one of whom is the DPS.

-Only one gate will be open on Fridays to the public. The main school gate closest to Lonsdale Road will be used for all public access and this is not near to any residential properties

-The event will be managed to ensure we fulfil the 4 licencing objectives and there will be a challenge 25 policy in place at all times. Alcohol sold in compostable cups will need to be consumed on the premises before leaving, supervised gate control will prevent drinks being taken on to the street-

-visitor numbers will be controlled in line with a temporary event notice and kept below 499.