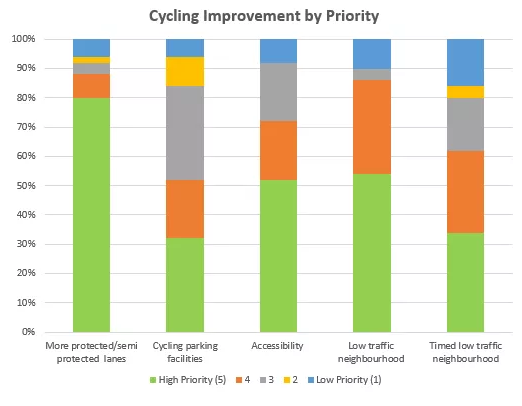 Local cycling campaign group, Brent Cycling Campaign is calling on Brent Council to make local streets safe and inviting for all, including for those who choose to cycle. Progress is far too slow to meet the Council’s own target of 5% cycling modal share by 2025 as detailed in its own Long Term Transport Strategy.

A survey carried out between February and April 2019 confirmed that people do want direct and convenient cycle routes with protected space on main roads with 80% of respondents seeing this as a high priority. The main barrier to cycling uptake is the lack of safety on our roads. This was quickly followed by a lack of a continuous network. This is an important aspect as the majority (37%) cycle for practical reasons such as going to work, to the shops or meeting up with friends.

Brent Cyclists, renamed themselves Brent Cycling Campaign (BCC) in January 2019. The new name better reflects its affiliation with London Cycling Campaign. It also explicitly indicates they are predominantly a campaigning group. In particular, they want to attract people who do not currently cycle, including those with mobility or accessibility needs.

Councils control over 95% of London’s roads. They have the power to create safe space for walking and cycling. New Brent Cycling Campaign coordinator and cycling school run mum, Sylvia Gauthereau. says: “ Change is well overdue in Brent especially as it is home for some of the worst levels of pollution in the UK.

Half of the households in the borough do not own a car. There are thousands of us making work, school and shopping trips every day and we demand better conditions for making cycling, alongside with walking, the obvious transport choice.”

The local London Cycling Campaign branch speaks up for a greener, healthier, happier and better-connected borough, urging Brent Council to align itself with the core principles of the Healthy Streets approach as detailed in the Mayor’s Transport Strategy.

BCC’s coordinator says: “Brent suffers from particularly poor cycling links and what are called “severance lines” – which are the horrible, nasty big road systems like Staples Corner and the Neasden underpass, which deter all but the bravest from cycling short local journeys. We need low traffic neighbourhoods, safe routes to school, inclusive infrastructure, liveable high streets where people walking and cycling are prioritised over motorised traffic”

A recent ride in Wembley and Neasden with London’s Walking and Cycling Commissioner left Will Norman admitting that these were “some of the worst places he had ever cycled”.

There are engineering solutions for these problems and Brent needs to step up and prioritise them” adds Brent Cycling Campaign who produced a comprehensive document highlighting these solutions.
“It’s clear that many more people in Brent, especially children, would like to cycle but are put off by the lack of safe routes and cycling conditions. This is serious – it is stopping people getting out, being independent, getting healthier and even being happier” BCC ride coordinator Charlie Fernandes continues.

“The case for active travel has been made many times over. There is a sea of evidence demonstrating that pollution and lack of activity will bankrupt local authorities for years to come, if not addressed urgently. Brent Council leaders must make active travel including cycling a top transport, health and environment priority now” says Sylvia Gauthereau.

Brent Cycling Campaign meet regularly alternating between Cricklewood and Wembley. “Join us and meet us at one of our monthly meetings and together let’s make Brent a borough where cycling is a choice anyone can make regardless of their age, ability or gender”, she concluded.

Results of the survey can be found here.
HERE