Following my report on the Northwick Park Planning Application hearing I was curious to know more about the submission of Brent and Harrow Cyclists. Cllr Saqib Butt, admitting that he hadn't seen the submission, asked planning officers about it. Without his intervention it is unlikely that it would have been discussed at all. You can hear the response in the above clip. If you read the submission you can see how the officer's summary does not do it justice.

Having declared a climate emergency I thought Brent Council would be proactive in searching for ways of reducing motor traffic and finding ways of making streets more friendly for pedestrians and cyclists in this massive development.  Instead, apart from the offer from the Highways Officer towards the end of the discussion the proposals (apparently unseen by the Committee) were pretty well consigned to the sweet bye and bye*.

I have now seen the detailed proposals made by the cycling campaigners and it is clear that a lot of research and thought had gone into their submission. Here is one of the illustrations: 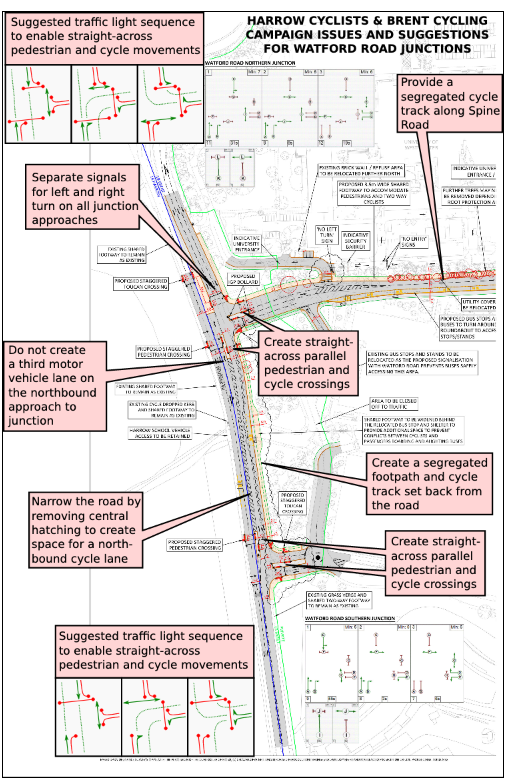 This is the joint response from Brent Cycling Campaign and Harrow Cyclists, two local groups of London Cycling Campaign, to the committee report for case number 20/0700, development of ‘Land adjacent to Northwick Park Avenue, London, HA1’ . We represent over 300 supporters and attempt to represent the interests of all who cycle or would like to cycle in NW London. We have some concerns about the planned development and have suggested some potential improvements, which we would be grateful if the council could consider.

I am not convinced that their proposals have been properly considered.

You can read the full submission on Brent Cyclists website HERE

This is far from the first time that detailed comments on a planning application have not been properly referred to by Brent planning officers in their reports to the Planning Committee.

They go into great detail when seeking to justify their own opinions, but anything from outside objectors, which might undermine their recommendation, does not get a fair hearing.

The Cyclists would be justified in making a formal complaint about this to Gerry Ansell (Head of Planning), with a copy to Alan Lunt (Strategic Director, Regeneration) for information.