1,400 petitioners will call on Brent Council to divest from fossil fuels at tomorrow's Cabinet Meeting 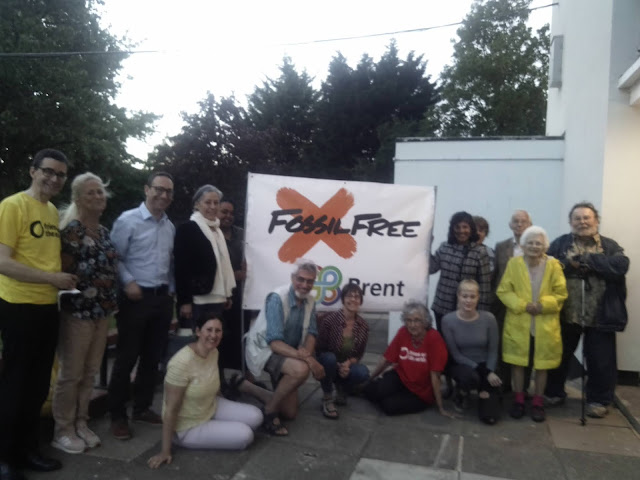 For over 3 years campaign group Divest Brent have been working to persuade the Council to divest its Pension Fund from fossil fuels. In 2019 the Council declared a Climate and Ecological Emergency and specifically agreed to redirect investments to renewal, sustainable and low carbon funds. Indeed some investments have been made in this area but the majority of the Pension Fund is still invested in funds which include fossil fuels. 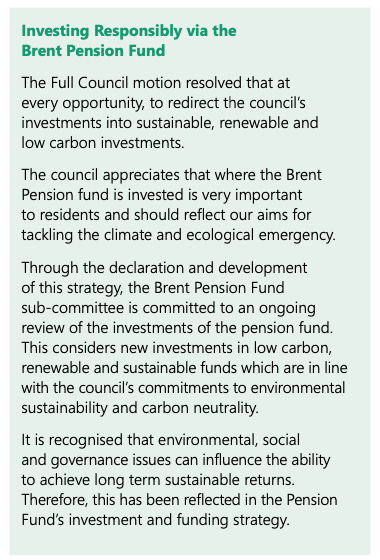 Extract from the Climate Emergency Strategy

We welcome any moves by the Pension Fund to invest sustainably and to help with the transition to renewable energy – but the fact is that whatever green investments the Fund may have, while it continues to invest in fossil fuels it is part of the problem.

We were originally going to present the petition to the full Council meeting in July but the Cabinet will be discussing the Council’s draft Climate Emergency Strategy. Following campaigning by Divest Brent the draft Strategy now includes a section on the Pension Fund’s investments – and we decided that this was the best time to submit the petition, when the Cabinet was anyway looking at the issues involved.

Divest Brent has written a joint letter to Councillor Krupa Sheth, Council Environment lead, with Brent Friends of the Earth, calling on the Council to divest the Pension Fund as part of the Climate Emergency Strategy.

The presentation of the petition comes hot on the heels of a report entitled “Divesting to protect our pensions and the planet” which gave a comprehensive breakdown of the extent that UK Councils were invested in fossil fuels. 3% of Brent’s Pension Fund is thought to be invested in fossil fuels - £26 million. Compared to the £40 million invested in 2017 this looks like an improvement – until it is realised that much of the reduction is due to a fall in value of fossil fuel investments.

The Council has admitted that, while much of the Stock Market has suffered from Covid 19, they have lost £8 million by failing to divest from fossil fuels before the pandemic. They are not alone in this – with UK Councils having lost £2 billion altogether over the last 4 years – but £8 million is still a serious loss compared to the Pension Fund total of £800 million.

With the outlook for fossil fuels never worse as the electric vehicle revolution starts to kick in and governments look to move away from gas as a means of heating our homes, Pension Fund committee members could find themselves in breach of their duties to protect the value of the Fund if they do not start to move seriously towards divestment.