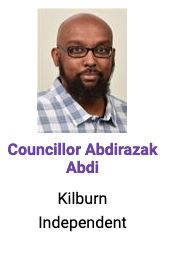 As the above screengrab from the Brent Council website shows Cllr Abdirazak Abdi is no longer a member of the Labour Group after his resignation.  He follows in the footsteps of Kilburn councillor John Duffy, who also became independent, and more recently Cllr Kieron Gill who was suspended from the group for 6 months after he abstained on the budget.

The resignation comes just under a week before the GLA election and the Brondesbury Park by-election caused by Gill’s resignation. It is a year before the Brent Council elections which will be fought on revised ward boundaries with a smaller number of seats.

Cllr Abdi, a socialist, lost his position on Brent Planning Committee after allegedly voting the ‘wrong way’ despite that Committee being statutorily non-political and therefore not whipped LINK. LI

He clearly has not been happy with the direction that Brent Council has taken under the leadership of Cllr Muhammed Butt and previously challenged him for the leadership. Like many on the left of Brent Labour he was attracted to the party by Jeremy Corbyn and distrustful of what many call ‘managerial Labour.’

More generally I understand there is disquiet in the party over what appears to be attempts to put pressure on the two Scrutiny committees over what reaches their agendas. This follows the calling in by a group of Labour members of the 1 Morland Gardens development for scrutiny LINK , the special meeting on the  the implementation of Healthy Neighbourhoods   (LTNs) LINK  and a skirmish over the possible calling in of AT Medics over the Centene takeover of GP surgeries in Brent LINK.

As said many times on Wembley Matters, the role of scrutiny in a mainly one-party council is absolutely crucial and it will be a sad day for democratic accountability if the leader’s control is extended to the Scrutiny Committees, as well as his more subtle influence on the Planning Committee.