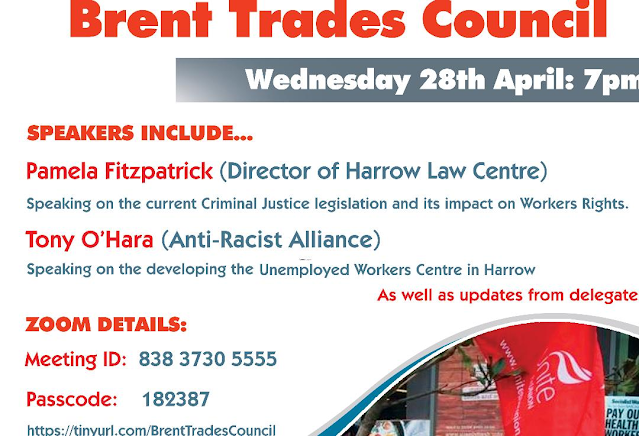 REMINDER
ONLINE TRADES COUNCIL MEETING (Open to non-delegates but you will not have voting rights)
Wednesday 28th April at 7pm.
Join Zoom Meeting
https://us02web.zoom.us/s/83837305555?pwd=Ykx0WlJpTVk5OWxMMnpHQVlaejlGQT09#success
Meeting ID: 838 3730 5555
Passcode: 182387
BTUC has invited two speakers.
Pamela Fitzpatrick - Director of Harrow Law Centre and delegate to Harrow TUC Speaking on the Police Bill
It is quite clear the Tory government's intention is to curtail any protest, including pickets, strikes and other protests that workers take in pursuit of their interests, as well as social movements like BLM.  The ongoing brutal assault on the working class and the major unrest following months of restrictions due to lockdow is resulting in a legal crackdown of immeasurable proportion. BLM has forced a reckoning over this country's colonial and slave-owning past, as it calls into question the entire legitimacy of the ruling class.
May 1st is a national day of action over the police bill.  Lets try and mobilise as many people as possible for the demo on the day.
Anthony O'Hara (Anti-Racist Alliance and delegate to Harrow TUC)
speaking on the developing Unemployed Workers Centre
As the furlough scheme comes to an end unemployment levels will go through the roofand the further rise in poverty is a consequence of Tory failure to provide an  economywhich provides jobs to ensure working class people can provide for themselves and their families.
The meeting's Agenda includes
Reports from our delegates:
Gerry Downing on the Kilburn Unemployed Workers Group;
Jonathan Fluxman on the campaign against Centene/Operose;
Sonia Morgan on the Metroline Travel and Metroline West bus dispute
protesting at employers proposal to introduce remote sign on; our online
petition has 1026 signatories
Report from our Secretary (Nick Jones)
Report and vote on our audited 2020 accounts (Padraic Finn)
Brief update on the Willesden Trades and Labour Hall
A cultural intervention from Debbie Allen who has offered to read a short poem to commemorate the Amritsar Massacre (13 April 1919) when British troops fired on a large crowd of  10 000 unarmed Indian women, men and children in an open space known as the Jallianwala Bagh in Amritsar.
Delegates only will be entitled to vote.
PS 1026 signatories have been added to our open letter to Sadiq Khan opposing remote sign on.
A press release has been circulated and with delegates agreement the letter will be sent to the Mayor following our trades council meeting.
PLEASE KEEP SIGNING AND SHARING THE OPEN LETTER TO SADIQ KHAN No to REMOTE SIGN ON
https://www.megaphone.org.uk/p/BrentTradesCouncil
NO TO REMOTE SIGN ON, DEFEND BUS DRIVERS TERMS AND CONDITIONS
Posted by Martin Francis at 12:12:00