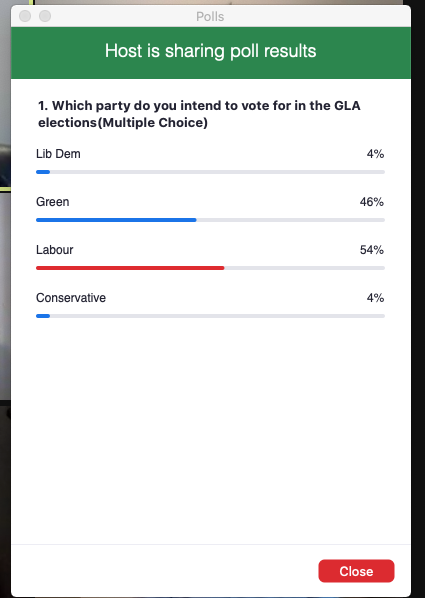 Emma Wallace of Harrow Green Party, and out GLA constituency candidate for Brent and Harrow, convinced many environmentalists yesterday evening at the hustings organised by Brent Friends of the Earth.

Labour's Krupesh Hirani slumped to 26% after the hustings compared with 54% before he had spoken.  Emma Wallace gained 11% to take the lead and  Liberal Democrat Anton Georgiou quadrapled his vote from a meagre 4% to 17%.

The Conservative  candidate was invited but did not attend.

Although the environmentalists who attended the event at which the "straw polls" were taken may not be a fair reflection of the whole population of Brent and Harrow, this item does highlight the importance of considering carefully who you should vote for in the forthcoming GLA and London Mayor elections.

I am, by choice, an "independent", who is not a member of any political party. I'm certainly not going to tell you who you should vote for, but I am going to ask you, please, to use your vote(s) on 6 May.

It is vital for local democracy that as many people as possible engage in elections, particularly local ones. I would also recommend that they (and that includes YOU) vote for the candidate who they consider will do the best to look after the interests of their area, irrespective of what party "label" they are wearing.

When it comes to the election for Mayor of London, there are many candidates to choose from, and you have two votes. One is for the candidate you would most like to see serving as Mayor of London. The other is a "second choice".

After all the first votes are counted, if the leading candidate does not have more than 50% of the votes, the top two candidates have the second choice votes cast for them allocated to their original total, to decide which of the two is the winner.

The Labour and Conservative Parties sometimes try to tell voters that it is "a two horse race", so that you should not vote for the "minor parties" or independent candidates, as that would be a wasted vote. That is not true.

If you want to vote for Sian Berry (Green), Luisa Porritt (Lib Dem), any of the other smaller party or independent candidates, or even Count Binface, because you think their policies would be best for London for the next three years (yes, because we are effectively having the 2020 election in 2021), then give that person you first vote.

Who you choose for your second vote is also up to you. In past London Mayoral elections, the top two have always been the Labour or Conservative candidates (although, as the investment adverts say, 'past performance is no guarantee').

But, as I said above, PLEASE VOTE, as your vote records what you would like to see happen. And if enough other voters agree with you when making their own choice, your vote can help to elect the candidate you prefer.

By NOT bothering to vote, you could help someone you would rather not have in power elected instead!

Good that he is encouraging people to apply for a postal vote by 19 April.

Then it goes a bit weird - what has early votes helping the US to get rid of Donald Trump got to do with using your postal vote to vote for him???