In this guest post, written in a personal capacity, Philip Grant returns to the the contentious planning issues surrounding the placement of advertising over the Bobby Moore murals at the Olympic Way underpass. It may be long but makes for rewarding reading as it reveals meticulous research and the polite but unapologetic logic of Philip Grant's position.

On 1 March, Martin posted a “guest blog” from me which included an update on the dispute over whether Quintain has the right to cover the “footballers” mural, in the Council-owned subway near Wembley Park station, with adverts on “event days”, including the Euros football matches this summer. It included the text of a message I’d sent to Carolyn Downs, Brent’s Chief Executive, on 25 February, showing how the dispute could be resolved immediately. Six weeks later, it has still not been resolved. Why? 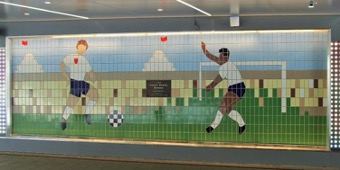 The footballers tile mural, with the lights of “light boxes” just visible at either side of it.

Quintain had agreed in 2019 that this mural would be put back on permanent public display, even though the other mural scenes on the walls of the subway would be covered over with “light boxes” on which advertising material could be displayed. But the secret deal by Brent Council officers, extending Quintain’s Bobby Moore Bridge advertising lease until August 2024, included a clause which said that they were entitled to cover this tile mural with adverts on a number of stadium “event days”.

An officer had replied on 25 February, on Ms Downs behalf, to say she would ‘ensure you are provided with a response as soon as possible.’ When I’d heard nothing more two weeks later, I decided that a letter to our local newspaper might encourage the Council to “do the right thing”, and the “Brent & Kilburn Times” kindly published it (the headline was not mine). 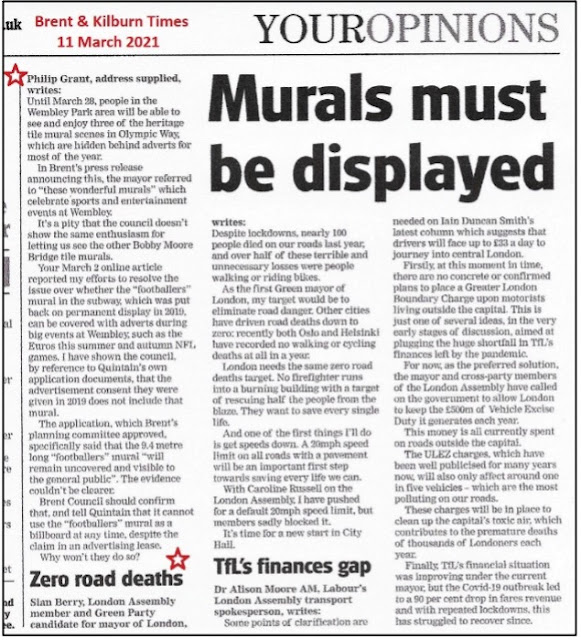 The following day (Friday 12 March), the Council officer emailed to say that I would receive a response ‘early next week’. More than a week later, this is what I received:

'I apologise again for the delay.  We are in the process of obtaining external advice in respect of the issues you have raised.  We will be able to send you a substantive response once we have received that.'

Why were Brent Council paying an outside lawyer for more advice, when I had already given them a clear explanation of the answer to this point, with full supporting evidence, for free?

When I received the “substantive response”, as part of an email from Carolyn Downs on 30 March, the Council did at last agree that the 2019 advertising consent ‘does not extend over the Footballers’ Mural.’ Hooray! They’d finally accepted the facts I set out to them more than a year earlier.

But there was a sting in the tail. There had been an original advertisement consent application, made in 2013, but not dealt with by Brent’s Planning Department until August 2017. Ms Downs said: ‘I am therefore advised that advertisement consent 13/2987 remains in place for the display of vinyl adverts attached to the tiles surface of the Footballers’ Mural provided they are attached to the tiles.’

It did not take me long to dispose of that point, and I replied later the same day: ‘I have to tell you that whoever is giving you advice on this planning matter has got it wrong, again.’ I explained in detail why that was the case, and summarised the position as follows:

Application 19/1474 was made, dealt with and approved on the basis that the advertisement consent 13/2987 was replaced, as far as the Bobby Moore Bridge parapets and subway walls were concerned. The consent until 24 August 2022 under 13/2987 only applies to covering the tile murals on the flanking walls outside the subway.

There was ample supporting evidence for my statement, including this section from the agent’s letter of 18 April 2019, submitting the advertisement consent application (19/1474):

I thought that should be enough to settle the matter, but no. On 9 April, I received an email from Brent’s Legal Director, Debra Norman. It claimed that the consent under application 13/2987 still allowed Quintain to cover the “footballers” mural with vinyl advertising sheets:

‘Officers have considered the elevation drawings referred to in the Consent and are satisfied that they show the east and west walls of the underpass and adjoining Olympic Way which are tiled. In consequence, the Council does not agree with your contention that the consent only applies to the tile murals outside the subway.’ … and further:

‘… there is nothing in the later consent (19/1474) which prevents continued reliance on the Consent to the extent that the two consents are compatible.’

Well, actually, there IS something in consent 19/1474 which means that consent 13/2987 no longer applies to the “footballers” mural. I agree that both consents applied to that tile mural, but the later consent specifically replaced the original consent, for the whole of the Bobby Moore Bridge and its subway! Again, I replied on the same day to explain the correct position.

I will ask Martin to attach the documents showing the two exchanges of views (30 March and 9 April), so that anyone who is interested can read them, and draw their own conclusions on their respective merits.

But why are Brent Council, and its top officials, so desperate to claim that Quintain can put adverts over the “footballers” tile mural?

Are they afraid to tell Quintain the truth? Well, they shouldn’t be, because under the conditions of the advertising lease (as extended) it is Quintain’s responsibility to obtain any consents they need in order to display advertisements on the Bobby Moore Bridge, and Quintain have failed to do that for the “footballers” mural.

Are they embarrassed because Brent’s own property lawyers failed in their “due diligence” over clause 10.3 of the extended lease, which claimed to entitle Quintain to cover that tile mural with adverts on “event days”? That was an error on Brent’s part, particularly as they had allowed Quintain’s property lawyers, Squire Patton Boggs (UK) LLP, to draw up the “Deed of Variation”.

Is Brent’s top lawyer determined not to concede a legal argument to an ordinary member of the public? Anyone can get things wrong (I do myself, occasionally), but when you are left “clutching at straws”, perhaps it is best not to embarrass yourself further! [If it is any comfort, although I do not have any formal legal qualifications, I have the experience of a working life dealing with complex legal points, and preparing cases for tribunal and court hearings.]

Or is it that Brent does not want to give up the chance of potentially earning “a few dollars more”, from the share of profits it might receive from Quintain, if it can sell the “footballers” tile mural advertising space for big events at the stadium?

Who knows why (and I don’t suppose they will ever tell me)? I hope that Brent Council will now concede this point, agree that Quintain does not have advertisement consent for covering the “footballers” mural, and that it will not waste further time, effort and money (your and my Council Tax money!) in pursuing an argument it knows it has lost.

I've written personally to Brent's Chief Executive, Carolyn Downs, and to the Leader of Brent Council, Cllr. Muhammed Butt, appealing to them to get this matter resolved by the end of this month.

I hope that I will have something positive to report by then!