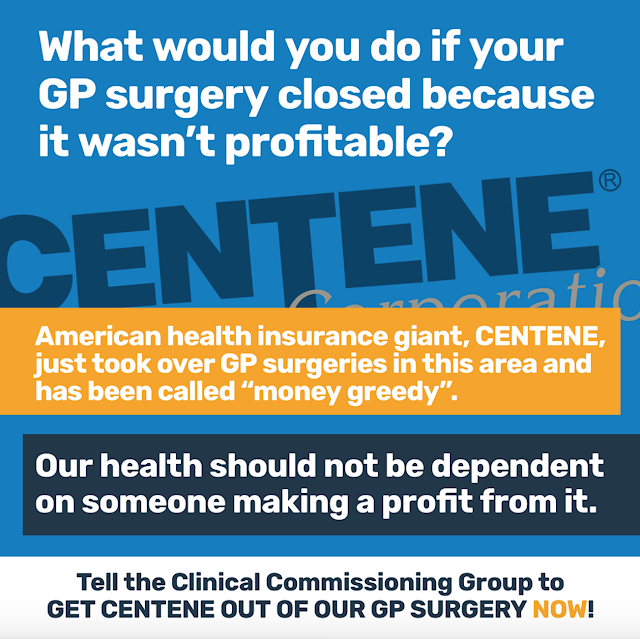 49 GP practices in England have been taken over by a private health company based in the United States. The decision was made, very quickly and quietly, at a Brent Clinical Commissioning Group  meeting in December.

The GPs who had been on the board have resigned and been replaced by appintees from the insurance company. Three of the GP practices are in Brent and one of them is in Willesden Green - The Burnley practice based at Willesden Centre for Health & Care in Robson Avenue.

There are London wide demonstration against the takeover planned for Thursday 22nd April. The local demonstration Outside Willesden Centre for Health & Care, Robson Avenue, NW10 3RY - where the Burnley GP practice is based. Time 2-3pm Stay for 5 minutes, stay for an hour. Wear a mask, keep socially distanced.

If it gets too crowded we may have to do a walking march / demo along Robson Avenue!

Bring a home made banner with you. Bring a friend. (You can go to Roundwood Park after the demo!) In Central London - there is a demonstration outside Centene headquarters, the details are: Address: Operose Health HQ, 77 New Cavendish St, W1 6XB Time 3-4pm

Green Left the eco-socialist group in the Green Party has issued the following statement in sypport of tomorrow's demonstrations:

Green Left urges Green Party members and supporters to join the campaign against the takeover of General Practice surgeries by Operose Health, owned by Centene, a US health company.  The campaign includes a demonstration outside Operose Health HQ in Central London on Demonstration outside Centene headquarters on Thursday 22nd April 2021 3-4pm (Operose Health, 77 New Cavendish Street, W1 6XB) and in other areas of London as well as Nottingham and Leeds. Details here: https://keepournhspublic.com/event/stop-corporate-take-over-gp-surgeries/

Green Left notes that 70 GP practices in the UK, 49 of them in London, have been taken over by the Centene Corporation, a major US health insurer, through its UK subsidiary, Operose. These were approved by NHS Clinical Commissioning Groups (CCGs) without consulting the public or local councils and with minimal oversight of the effect on NHS staff and quality of service.

We demand that CCGs prohibit any further takeovers by Centene or other for-profit companies; and that all such existing for-profit contracts be terminated as soon as legally possible.

We believe that Centene has made its large investment in UK NHS GP practices, through Its UK subsidiary Operose, in the expectation that Operose will in future pay dividends to the parent company. Operose has contracts to digitalise the NHS, transferring various patient-physician interactions to online only, with serious implications for future quality of care. It is clear from the business model that dividends will involve the closure of non-profitable parts of its business. This could include closure of GP practices that remain unprofitable despite "rationalisation" through cuts in staff, wages and services to patients. Local GP practices in deprived communities, or with a large number of older patients, may be particularly vulnerable to closure and transfer of patients to large area GP hubs. This will create difficulty for patients with impaired mobility to reach a doctor.

We cannot trust   the 'due diligence' of CCGs who permitted the sale of independent-provider contracts to a new corporate owner, while apparently ignoring that Centene is accused by the Attorney General of defrauding Ohio of millions of dollars of Medicaid payments.

Unless these profit-driven takeovers are stopped, our NHS GP Services will be commercialised and taxpayers will pay more for a reduced service, the profits ending up in the US.

Looking at the Companies House details for Operose Health Ltd (originally incorporated in 2016 as Centene UK Ltd), I note that its main UK director, Samantha Jones, resigned on 30 March 2021. (I understand that she may have been appointed as a health service advisor by the Government!).

The new UK director, appointed 29 March 2021, is Elizabeth Mary Louise Perry. She was appointed a director of 15 other companies on the same day, all with their registered office addresses at either:
77 New Cavendish Street, London, England, W1W 6XB, or at:
Rose House, Bell Lane, Amersham, Buckinghamshire, England, HP6 6FA.

Other "Centene owned" companies that campaigners against GP practice takeovers may need to look out for, apart from those with the Operose and MH Services names, are Primary Care Partners, AT Medics / Learning / Technical Services, Phoenix Primary Care, The Practice Surgeries and Chilvers & McCrea (still with that name, although Dr Chilvers and Dr McCrea both resigned as directors in 2010).

The UK end of the Centene operations is owned through MH Services International Holdings (UK) Limited, which as well as Ms Perry now has only the American citizen, Tricia Dinkelman, as a director. Her correspondence address is listed as:
7700 Forsyth Blvd, Clayton, Mo, United States, 63105
which is the HQ building of Centene.

Despite the clear Centene connections, the "Persons with significant control" section of the Companies House records for this UK holding company has the following statement:
'The company knows or has reasonable cause to believe that there is no registrable person or registrable relevant legal entity in relation to the company.'