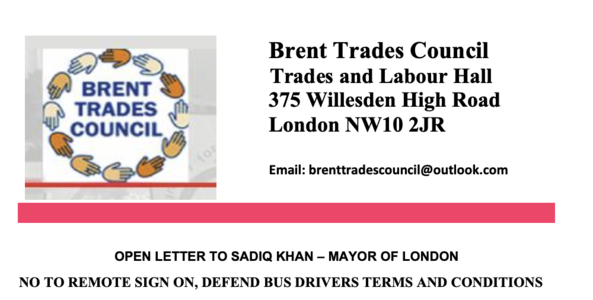 Brent Trades  Council is urging local residents and trade unionists to sign an open letter to Sadiq Khan urging him to stop  attempts to change the working conditions of London bus drivers.

The change, called 'remote sign on', would mean drivers instead of going to a garage to begin their working day going to a bus stop or other venue and joining a bus. Their working time would begin at that point and pay would be reduced if the bus was late. Drivers would only be paid for the time they are behind the wheel. The bus stop would of course lack the facilities of toilets and canteens available at a garage and limit interaction with other bus workers.  It is believed that the change would equate to a 7% fall in earnings.

We urge you as Mayor of London to stop remote sign on which bus operators are proposing to introduce on some bus routes. You have already instructed the Board of Transport of London (TfL) to order a moratorium on remote sign on in London which is conditional on “research” being done on its impact.

Research shows that remote sign on is bad news for drivers, detrimental to passengers and risks the safety of all road users. If a bus is delayed the driver is left, unpaid and in the open, for considerable lengths of time in all weathers, increasing issues of tiredness and fatigue. Driver fatigue is a health concern and a tired driver places passenger safety at risk. Also Unite the Union, of which you are a member, calculated that remote sign on would equate to an immediate seven per cent cut in wages on average for affected workers.

Only bus operators benefit from this scheme as they cut costs by reducing wages. This is why despite your moratorium Unite’s 4,000 members have vowed to fight remote sign on with everything they have as they are concerned your moratorium will not achieve a suitable outcome.

They have given overwhelming support to taking industrial action in defence of their terms and conditions.

Please ensure that as Mayor of London, you give bus drivers a cast iron guarantee that bus companies are not allowed to compete on pay and conditions for staff, please set a minimum and equal standard of employment for all bus drivers and re-assure bus drivers, who are essential workers, that both their pay and their terms and conditions are in safe hands whilst you are Mayor of London? And please keep to your pledge if re-elected Mayor on 6th May.