The Purpose of the committee

This Committee deals with certain types of planning applications and related matters. 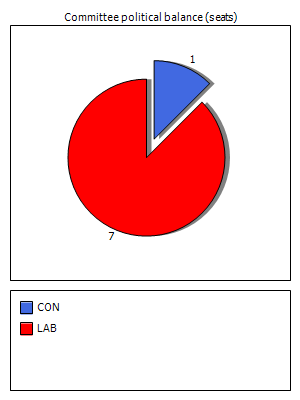 Below is a response I received from the Governance Manager at the Assistant Chief Executive’s Department at Brent Council after I raised my concerns  about what I experienced at the November 16th planning committee meeting and how  I thought this was a one sided biased system which would always result in one outcome.

‘Just a quick follow up to the email you sent earlier this week regarding the query you’ve raised about membership of the Planning Committee.

In terms of the balance of membership on the Committee, this is actually determined by applying the “political balance rules” prescribed by the Local Government and Housing Act 1989 and supplemented by the Local Government (Committees and Political Groups) Regulations 1990.  These rules are designed to ensure that the political composition of the Council’s decision-making committees including Planning, as far as possible, replicates the political composition and balance of the Full Council.

The Council is actually required to review the representation of political groups on relevant committees at the Annual Council meeting each year, with the last such review undertaken following the local elections in May 2022. As a result of the overall membership of the Council standing at 57 members, the breakdown by political groups as a percentage is as follows:

The total number of committee seats to be allocated across all relevant bodies and also according to the number of seats on each individual committee therefore has to reflect this overall breakdown in Council membership.

Given there are a total of 8 seats on the Planning Committee, applying the above calculation means we are required to provide 7 of those seats to the Labour Group and 1 to an Opposition Group member, which it was agreed at the Annual Council meeting would be allocated to the Conservative Group’.

Having attended Wednesday 16th November planning committee meeting as a neutral, I sat in the gallery right through the whole proceedings. I wanted to get a feel for how these meetings work as my neighbours and I are fighting yet another ‘infill’ proposal in Newland Court where we reside. There were 2 cases that I was interested in finding out what the outcome would result in. 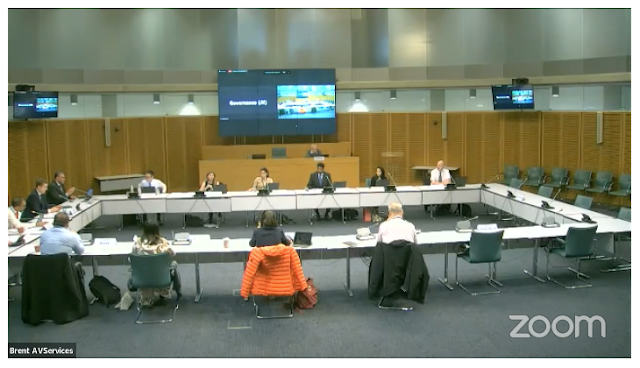 The Planning Committee in session

From what I saw it seemed like this was a one sided biased system which would always result in one outcome. The Labour councillors on the committee seemed to be all voting together and of course a majority outcome always in their favour. The planning application for both were approved. I also watched the full council meeting on Monday 21st November at 6pm where I discovered even more about Labour run Brent.

Even Cllr Michael Maurice who is a planning committee member and the only Conservative on the planning panel said at Monday’s full Council meeting, ‘Time and time again the planning committee approve private developments which fall short of social housing, unaffordable housing and don’t comply in regards to amenity space. And if Labour cabinet members don’t vote in favour with their other members, then they get thrown out’.

Well, I’m not too sure about that because from what I have already seen and experienced with those Councillors involved in all these new development proposals, Brent seem to have made up their minds about fast tracking all these ‘infills’ at any cost. At the detriment of their own existing residents who voted them in, including me.

Editor's Comment. It is worth adding that at the Full Council Meeting, Cllr Maurice said that he had seen comments on social media about councillors receiving 'brown envelopes'. He could say that he had never been approached with a brown envelope and despite political differences, as far as he knew none of the other councillors on the Planning Committee had been either.

I understand that the majority of the councillors are Labour Councillors on the committee and I have also witnessed how they approve developments that should not even been given a thought . There are already far too many student accommodation in Wembley Park and now they are selling out Wembley Central itself . Only to increase the desperation of people living with families in emergency accomodation and the disabled .

Brent run Labour are the reason why the list for housing is getting longer and longer because they are selling off to Developers and making Wembley unaffordable for the average working person . They have stopped making any social housing properties in Brent and never answer questions when asked about social housing crisis

All they care about is making money and employing people who back their unethical ways or they shut them down and make them disappear ( where their say has no impact ) abit like an Italian mafia .( this is a figure of speech not to offend anyone who doesnt work for Labour run Brent Council )

Surely the impact of any development on existing residents should be a key factor into the planning application consideration by the panel but it seems to be going to deaf ears at Labour run and Labour Controlled commitee meetings.

Labour councillors are like a robotic cult they seem to have been programmed by Labour leaders in the borough with a microchip with the same old dead script they is no repetitive its suicidal now . I would not vote Labour ever again

Brent should stop selling land to private developers, stop building unaffordable homes , causing a detriment to do there unacceptable infill developments and use the land they are selling to build social housing and suitable dwellings for the disabled asap.

Labour run Brent council need to go ...the infill developments will show people how they will mislead , come up with inaccurate survey results to paint themselves as saints ...when infact they are the reason why Brent is a mess because theh have sold is out .

They have ruined Brent

Not if you object to what Planning Officers or Cabinet members want!!!

There are eight members of the Planning Committee, so to get an application approved you need at least five members to vote for it.

The cases which come to Planning Committee for a decision are almost always ones where Brent's Planning Officers recommend the application for approval. Their recommendations are based on Brent's adopted planning policies (now contained in the Local Plan approved by Full Council in February 2022).

However, most applications include some points that go against planning policies. Then it is a matter of judgement, for the Planning Officers and the Committee members, how far they are willing to overlook the negative points, in order to justify granting the application on the positive ones!

Where the application involves new homes, the balance almost always seems to be in favour of building them, and the lack of amenity space, lack of privacy and light for neighbouring properties, lack of sufficient affordable housing (usually "justified" on the grounds of viability) etc. etc. is considered "acceptable", in view of the public benefits that more homes are supposed to give.

Because Brent has such high targets for the number of new homes it aims to build each year, now "set in stone" in its Local Plan, there is a presumption in favour of approving any scheme that Planning Officers recommend.

Then there are three more Labour members of the Planning Committee who always seem to follow the lead given by the Chair and Deputy Chair (which may be why they were nominated for those seats on the committee by ... you've guessed it!).

I could be wrong, but that is definitely the way I see it, from my own experience.

Thank you Philip, it is crystal clear that Butt gets exactly what he wants every time regardless of his own policies.

And Butt’s brother, Cllr Saqib Butt who is the deputy Chair of the planning committee is also the Director of First Housing Limited. This company was formerly Brent Housing Partnership and its business is the management of real estate on a “fee or contract basis”. To add to your analysis of the familial make up of the Butt Planning Committee Board, Cllr Ajamel is Butt’s brother in law. Butt is married to his sister.

The rules on being a Labour Councillor are very clear. Here is an extract on this:

"To be a councillor you must be: British or a citizen of the Commonwealth or European Union. at least 18 years old. registered to vote in the area or have lived, worked or owned property there for at least 12 months before the election.21 Jul 2022".

Cllr Rita Begum on Brent Planning Committee was a Westminster Councillor up to at least Feb 2022 when she announced she would stand as a Kilburn Labour Brent Councillor. See article:
https://www.westminsterlabour.org.uk/ward-news/2022/02/19/farewells-can-be-sad-says-councillor-rita-begum/

With the Councillor eligibility criteria above in mind, and fact that Cllr Begum was a Westminster Councillor up until she stood to be a Brent Councillor, an investigation into whether she was indeed eligible to stand as a Councillor in Brent needs to be undertaken.

Begum's email address on her Kilburn page is ritabegum4westlondon@gmail.com. 4WestLondon?! But surely it should be North West London as that's where Kilburn is where she operates as Councillor?!?

"In 2022, after having moved to Brent, I stood to be a Labour Councillor in Kilburn and won the seat".

The BIG question is WHEN did Begum actually move to Brent?!?

With the Councillor eligibility criteria in mind, and fact that Begum was a Westminster Councillor, presumably voting resident too, up until 4 May 2022, the only valid document she could provide to evidence her eligibility to stand as a Brent Councillor would be proof of ownership of a property in Brent for a period of 12 months up to the point that the Party selects its councillor candidates; and not to the date of the actual May 2022 election.

The Planning Committee business is complex and deserves the utmost scrutiny. Committee members must have integrity and honesty in every aspect of their lives.

To quell the fast growing rumour mill, Begum needs to provide the property information, evidencing that she was indeed eligible to stand as a Labour Councillor in May 2022 and subsequently take up seat on the Brent Council's Planning Committee. Renting a property is not the same as owning one.