When Wembley went to the dogs! 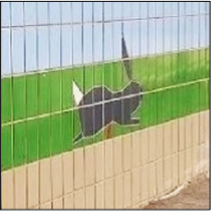 A few weeks ago, during cleaning work by Wembley Park in Olympic Way, some black paint or plastic peeled off of a wall. At first the workers thought they’d uncovered a picture of a rabbit. Then someone realised it was a hare, and that it might be something to do with the greyhound racing which used to take place at the old Wembley Stadium.

Sure enough, further removal of the black coating over the tiles revealed the greyhounds, and a scene which was part of the original 1993 Bobby Moore Bridge tile murals. This part of the design used the slope of the ramp down from Bridge Road on the east side of Olympic Way. Unfortunately, all three greyhounds were partly hidden behind steps which TfL had installed in 2006, as part of pedestrian access improvements ahead of the opening of the new stadium. 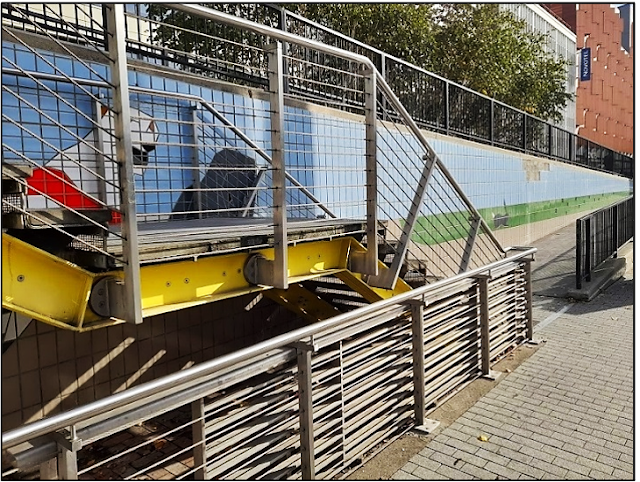 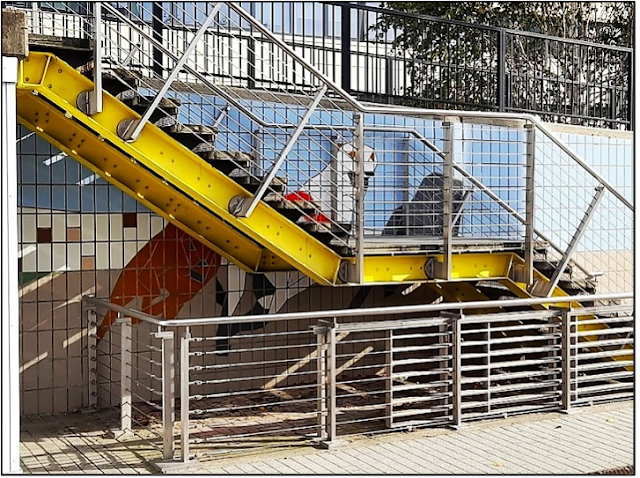 Greyhound racing played a very important part in Wembley’s history, as without it, the stadium built for the British Empire Exhibition might not have survived the 1920s. I shared the story of how Arthur Elvin saved the stadium from demolition in Part 4 of The Wembley Park Story, in 2020.

A single-day “booking”, for the F.A. Cup Final, would not have paid the cost of the stadium’s upkeep each year. But Elvin saw the potential of a new sport, which had proved popular since its introduction to England at Belle Vue, Manchester, in 1926. The clue was in the name of the company through which he, with friends, purchased the stadium from the Exhibition’s liquidator: Wembley Stadium and Greyhound Racecourse Company Ltd.

On top of the £122,500 they paid for the empty concrete building, the company spent a further £90,000 on improvements to the stadium facilities, and on the track, lighting and kennels. They started to see a return on their investment when over 50,000 people turned up for the first evening of greyhound racing on 10 December 1927. 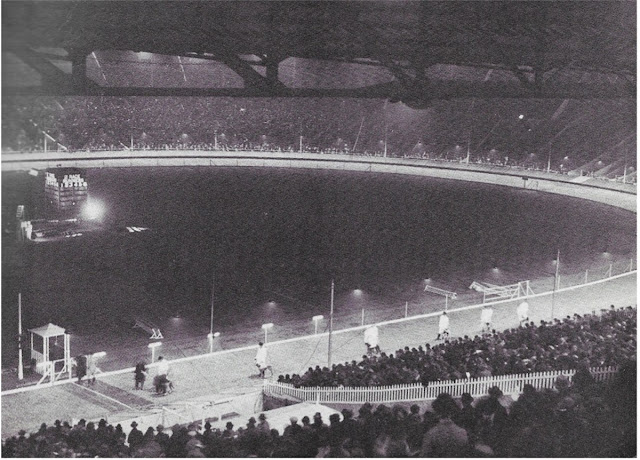 Greyhound racing at Wembley Stadium, December 1927. (From an old book).

Part of the appeal of greyhound racing was that it was more accessible to ordinary people than horse racing, often seen as “the sport of Kings” and the upper classes. But the big greyhound tracks wanted to keep some of the horse racing glamour. White City Stadium had already set up its “Greyhound Derby”, so Elvin introduced a competition called the “Greyhound St Leger”, which became the sport’s long-distance autumn “classic”, and a Wembley Gold Cup. 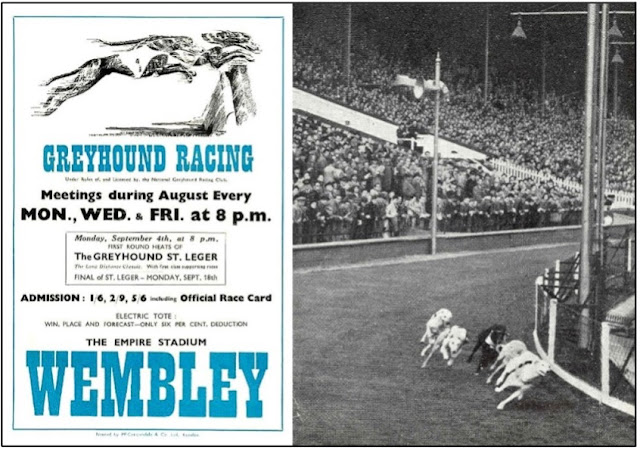 An advertisement for and photo of greyhound racing at Wembley in the 1930s. 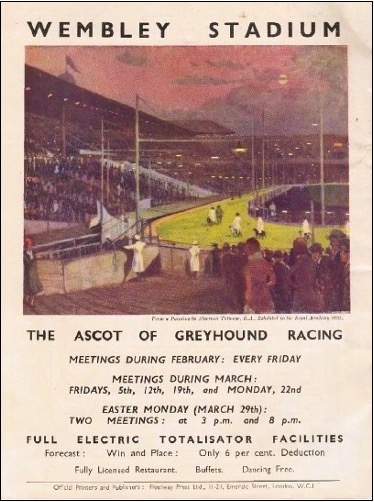 A 1937 poster for Wembley Stadium as “The Ascot of Greyhound Racing”. (Image from the internet)

With up to three evening’s racing a week, 1.5 million people had passed through the stadium’s turnstiles in the first year. Part of the attraction was that strict controls at Wembley meant the races were fair (unlike at some of the smaller, less regulated tracks), so that punters could be sure the results of each six-runner race were honest, and the betting was not “fixed”. Another attraction was that Wembley always put on a good show. 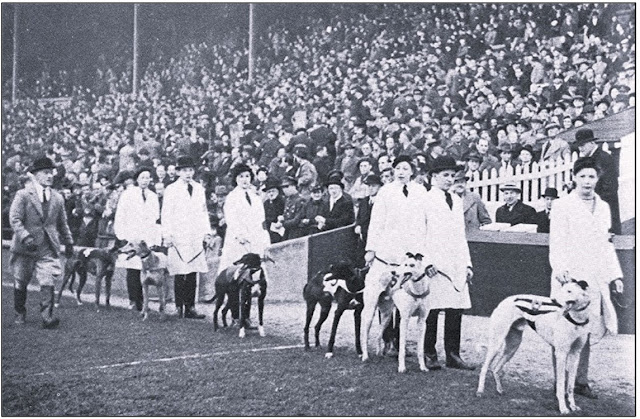 A parade of the greyhounds before a race. (Brent Archives – Wembley History Society Collection) 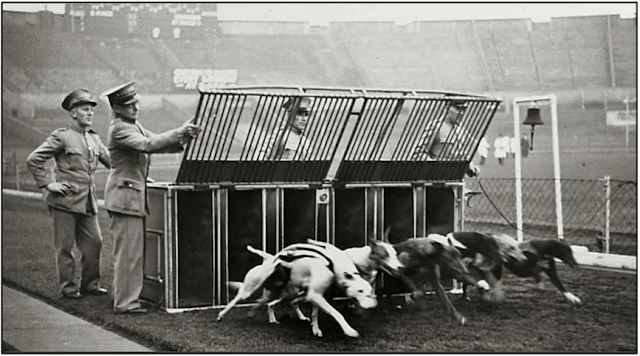 Uniformed attendants open the traps at the start of a race.

(This and remaining images from an old book)

Some of the most important greyhound racing meetings were held on a Saturday evening. But what about when this clashed with an F.A. Cup Final? No problem, as far as Arthur Elvin was concerned. The Cup Final always kicked-off at 3pm, and there was no extra time or penalty shoot-outs in those days. As soon as the Cup had been presented and the spectators had left, 400 men (Elvin among them, with his sleeves rolled up) would be clearing the tons of litter, restocking the bar and refreshment kiosks, and putting up the lighting around the track, ready for the evening’s race meeting at 8pm. 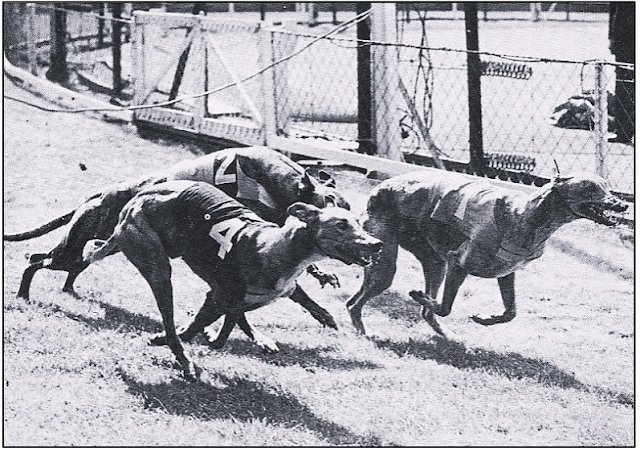 Three leading greyhounds approach the finish in a tight race.

The original Wembley greyhound track was 463 yards long and on grass. The artificial hare which the greyhounds chased was electrically powered, and ran on a rail around the inside of the track, at speeds up to 40mph (64 kilometres an hour). Some races were held during the Second World War, in daylight (because of the “blackout”), but a number of dogs were killed when a V1 flying bomb landed on the kennels, just to the north-east of the stadium, in 1944.

When the 1948 Olympic Games were held at the stadium, greyhound racing was suspended for a few weeks. The greyhound track had to be dug up, to prepare a cinder track for the athletics events, and after this Wembley had a sand track 436½ yards (399 metres) around, with its hare on the outside. 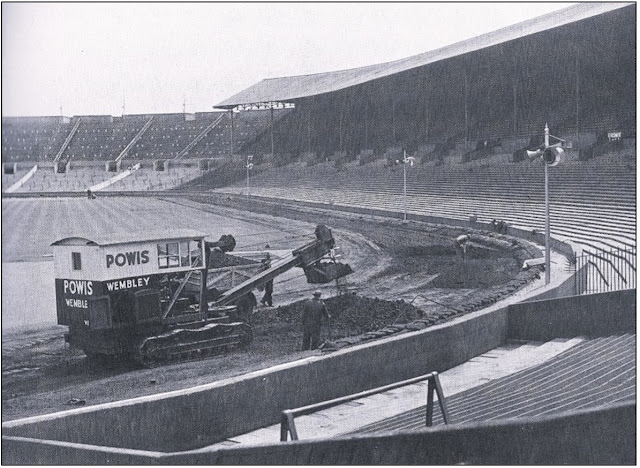 Preparing the running track for the 1948 Olympic Games.

From the 1950s onwards, greyhound racing at Wembley continued two or three times a week, all year-round. It was still very popular, and attracted large crowds, not just from the local area. It was so popular that when the football World Cup was held in England in 1966, one of the Group 1 matches, France v Uruguay on 16 July, had to be played at the White City Stadium, because Wembley refused to cancel its regular Friday evening greyhound meeting! 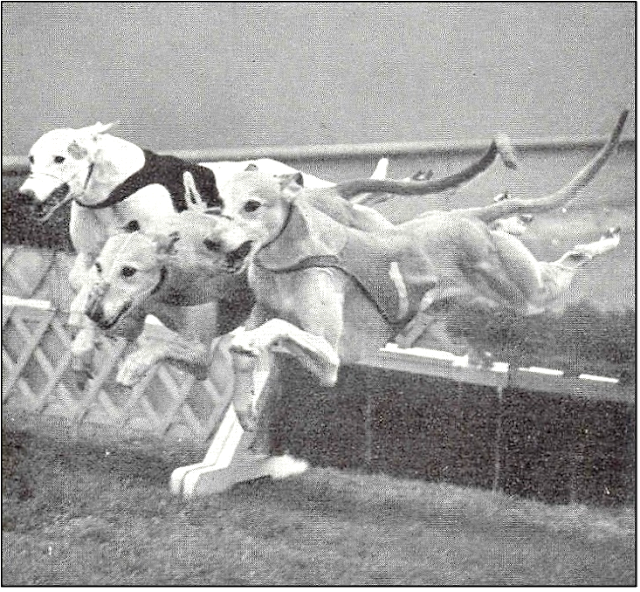 A greyhound race over hurdles at the Wembley track.

However, by the 1990s fewer people were attending greyhound racing, and the Wembley track began to make a loss. The news that the ageing stadium was going to be demolished, and a new one built, hastened the end of a sport at Wembley which had lasted for over 70 years. The last greyhound racing meeting was held there on 18 December 1998.

Do you have any memories of “going to the dogs” at Wembley Stadium? If so, please share them in a comment below.