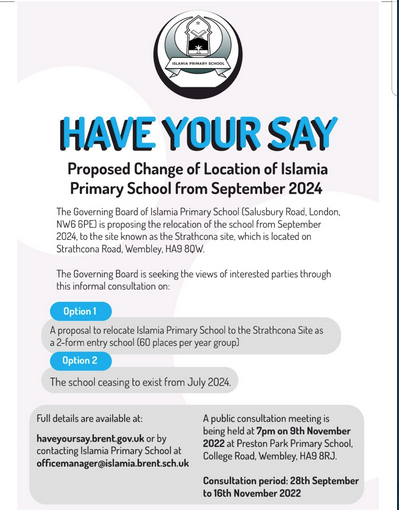 So far the only option offered has been move to Strathcona Road site in Preston ward or close. The consultation closes on November 16th. You can comment on the Brent Council Have Your Say site HERE. 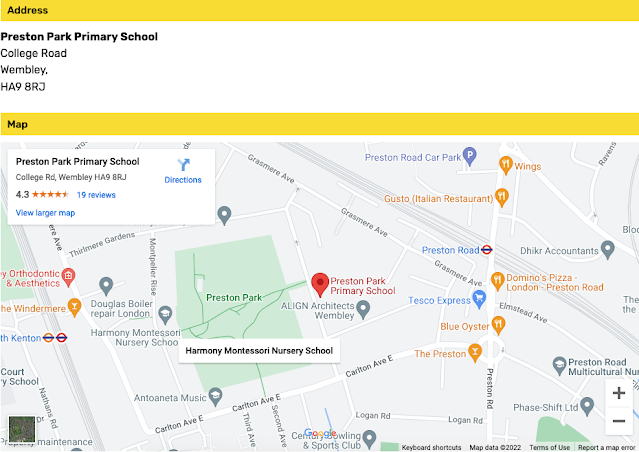 Here are a selection of the comments so far. Publication here does not represent approval of the content but it is important for everyone to know what is being said.

Strongly Oppose the relocation to this site

The site is most definitely not suitable for the school (any type of school for that matter).

The road itself is very narrow and Carlton avenue is already a very busy road. As many have mentioned the students of this school are not located in the local area and therefore probably won’t use public transportation. That means their parents will drive them in. Adding to traffic and local pollution. Wasn’t this the reason those ridiculous LTNs were installed.

Many of the students parents don’t even want the school relocated to this site and even started a petition.

Brent council don’t seem to have the local residents in mind when proposing such ideas. It is already an over populated area where resources are being maxed out.

Again I’d like to express how strongly I oppose this school moving to this site.

HA9 doesn't not need or want this school

Reasons relocating the school to HA9 / Strathcona is a totally unsuitable:

We do not need another school at this site. There are already 3 schools in an around the area and it gets extremely busy in the school peak hours. Residents of the area are extremely unhappy with this proposal because this will create additional traffic, congestion and noise and air pollution.

This site is on the narrow road with parking on both sides of the road. The bus route 223 also operates through this narrow road. If you have to pass through in the school pick up and drop off times, travelling through this road is a nightmare. People are parking everywhere, hooting and not following the traffic rules and no common sense prevails whatsoever.

I strongly object to the school at this site due to all the above issues.

You have 1 faith based Islamic school and at a time where far right anti-Islamic sentiment is rife instead of continuing to be the “most diverse and inclusive” borough in London you choose to spit in the face of the Muslim population of Brent this is outrageous.

Not suitable to site a new school in Strathcona road

The area has three schools adjacent to this site already. Traffic is already gridlocked by these schools, residents will be blocked in as there is only one way in and out of this site.

I strongly oppose this change. I live very close to the area . Firstly no local residents have been informed of this , I got a leaflet drop today (04/11) telling me the consultation period is 28/09/22 to 19/11/22 & a consultation meeting will be held on 09/11/22. This is an event day area, Brent council ignored the residents on this issue so parking is an absolute nightmare in the area. This is a residential area with one bus route that is always delayed as you can only get one car on the roads due to heavy traffic and full capacity cars constantly parked . Most of the primary schools in the area old & new have been extended and are now undersubscribed . The proposed area is on an industrial estate not suitable for young children but we just cannot cope with the volume of current traffic or non availability of parking in this area. It’s madness that parents with young children have to travel from NW6 to South Kenton . Is there another agenda to close that school for developers to build flats to make lots of money . Not one local resident was aware of this proposal until recently . I object to this and hope Brent planners don’t approve it. I’ve also heard it’s a done deal . If this is the case it’s illegal without proper consultation.

Another school is not needed here – will undoubtedly cause more severe traffic.

This school has no link to this area and does not belong here. It will only serve to exacerbate the existing terrible traffic issues that residents like myself currently have to suffer during school drop-off and pick-up times on Carlton Avenue East and surrounding roads.

I have witnessed and taken photos of illegal parking, blocking of drives, driving on pavements etc. which were shared with the council. We have only just recovered from the ill-considered LTN schemes and now Brent Council is looking to foist this new silly proposal on long suffering local residents, which will actually increase traffic further! This will only lead to increased risks for residents, road users and pedestrians, including school children. Residents' considerations need to be first and foremost, as we will have to live with the consequences of yet another scheme serving outside interests.

There is already enough school provision in the area, and any further requirement should be met through existing schools and serve the entire community, rather than any specific group. Moreover, Strathcona Road is certainly not an appropriate location, and option 1 should be firmly rejected. Of the available options, I support option 2 – if this school continues, it should be somewhere closer to its current location, where the above issues do not exist and local links are already present.

Too many schools in close proximity

I do not agree with the proposal, there are already 2 other schools in close proximity to the location proposed. These are Byron court primary and Preston park primary. There are extreme challenges at present with parking and traffic and the introduction of another school, will add to what is already a huge problem. The increase in cars will add to traffic, pollution, noise in our area.

I would suggest an alternative location be found for the school.

I do hope this proposal is shared with the neighbourhood and proper consultation and feedback gathered before proceeding. I urge you to write to each household in the area and seek proper feedback before proceeding with what I would refer is a poor proposal with sub standard options.

Remove this school and other faith based schools

Ever since Brexit secular schools have less students than they have the capacity for. Faith based schools should be reduced as much as possible and those students integrated into the secular schools that now have space. It is important for children to experience as much diversity as possible from a young age.

We don't need another school

This area cannot cope with another school. Strathcona Road is very narrow and cannot cope with the traffic. The traffic during school times on Carlton Avenue East is terrible with people illegally parking, blocking drives, driving on pavements, numerous accidents have happened etc. It is dangerous.

When Roe Green Strathcona was closed, extra school places were allocated to surrounding schools. Most schools in the local area are not fully subscribed so we do not need yet another school in the area especially one where most kids will be needed to be dropped off by car.

Brent Council was intent on low traffic neighbourhoods and this proposal is any thing but low traffic.

Why was Roe Green Strathcona forced to close? why are all those reasons not valid anymore? Stop being so two faced Brent Council

I vote for Option 2. The options presented are terrible by the way. How can it be either close the school or relocate to where no one wants it! has brent council seriously considered alternatives???

Will Brent Council reopen the road that leads to East Lane instead of a private gate for a privileged few?

I think relocating the Islamia Primary School to Wembley is a great idea! Wembley is already a very multicultural area and the addition of this school will further encourage that multicultural tradition. We proudly have other faith schools such as Catholic and Jewish schools in our local areas and I think the addition of an Islamic school will reflect even more so the diversity we are so proud of.

It’s really saddening that the Council, the Governing Body and the Foundation have all agreed on either moving 6 miles away or ceast to exist. No other options are given. How is this acceptable? The Council must and can do better!

The “disgraceful and islamophobic” comment was a bit much, does he know it is the school board that wants to move the school