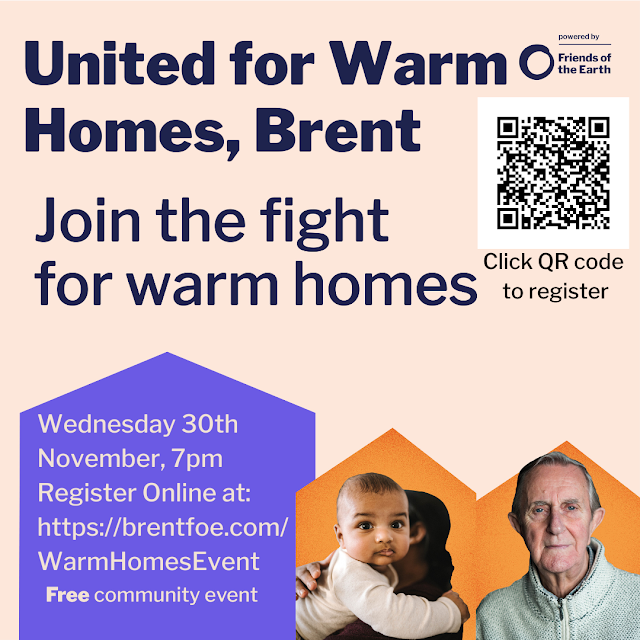 A number of local organisations and campaign groups have joined forces as part of a new coalition calling for a response to the energy crisis that ensures no one goes cold in winter.

United for Warm Homes, Brent is a new local campaign which aims to bring together communities concerned about the impacts of rising energy bills to advocate for affordable energy and demand the right to a warm home.

The partnership involves a variety of organisations that work on local issues including housing, food banks, parks, faith groups and environmental protection. They hope that by working together towards a common goal, they can win the fight for warm homes that don’t cost the Earth.

The average energy bill has almost doubled in the last year. Even with the government’s recently announced package of emergency financial support, it’s expected that around six million people will be in fuel poverty in the UK this winter – that’s almost double the number in 2021.

Clearly, the sky-rocketing price of energy is hitting some people harder than others. That’s why United for Warm Homes, Brent is calling for additional financial support to help those who need it most and to stop people going cold this winter.

But financial support is only a short-term fix. To put an end to the energy crisis we need solutions that will get to the root of the problem - our heat-leaking homes and dependence on expensive and volatile gas.

The UK has some of the worst insulated homes in Europe. That means they require more energy to stay warm and therefore cost more to heat.

By rapidly rolling out a council-led, street-by-street insulation programme, targeted first at the most in-need households, hundreds of pounds can be saved each year on the average annual energy bill. United for Warm Homes, Brent wants this to be at the top of the agenda for local and national decision-makers.

This is needed alongside getting UK homes off costly gas for good, which more than 80% depend on for things like heating and hot water. Instead of extracting more fossil fuels, boosting investment in cheap, clean renewable energy will help to bring down bills quickly, because renewables can be developed faster than more oil and gas.

The solutions that will lower our bills permanently are also the same that can cut the climate-changing emissions our homes produce, so they are a win-win for both people and planet.

The new local partnership will be one of many across the UK contributing to a much bigger national movement calling for the transformation of our energy system and a drive to insulate UK homes.

United for Warm Homes, Brent will be holding its kick-off event online at 7pm on 30th November for members of the public who would like to learn more about the partnership and get involved in the campaign.

To register for the event go to https://brentfoe.com/WarmHomesEvent.

To find out more about the national campaign please visit www.unitedforwarmhomes.uk.

We all deserve to live in warm homes that don’t cost the Earth. But with energy bills nearly double what they were last year, and living costs such as food and rent spiralling, millions across the country are facing a bleak and miserable winter.

No one in Brent should have to go cold just to be able to feed their families or pay their rent. We recognise that there are so many of us locally who want happier, healthier communities. By coming together, we want to build a powerful local partnership that wins the fight for warm homes.

We believe we can achieve this by demanding the solutions that are simply common sense. Insulating our heat-leaking homes and investing in cheap, clean renewables can both save households hundreds on their energy bills and lower costs for good. The great thing is that these solutions are also what’s needed to protect our planet and ensure that future generations have a world left to grow up in.